Hill Bagging (For The Geographically Challenged!) 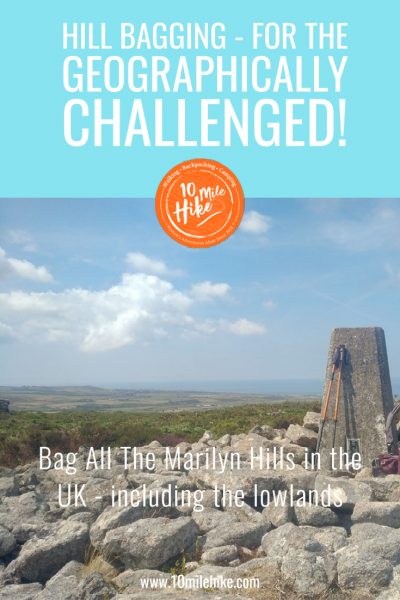 Hill Bagging In The Lowlands Of The UK

(Also A Great Way To Discover More Of Cornwall!)

Hill bagging is a popular pastime amongst walkers and hikers and there are plenty of different lists to check off and complete. You can bag all of the UKs county ‘tops’, collect all the Wainright’s in Alfred Wainright’s list of fells in the Lake District, or go hill bagging for Munros and Corbetts in Scotland. It’s a great way to get out and explore the wider landscape.

The UK’s highest hills and mountains are in the north of the UK of course. But there’s an alternative for those of us that are geographically challenged: the Marilyns.

The list was compiled in 1992 by Alan Dawson. He supposedly dubbed them ‘Marilyns’ as a pun on Munro.

Tick Off A Marilyn Hill

“…a Marilyn [is] any hill that has a drop of at least 150 metres on all sides, regardless of distance, absolute height or topographical merit. At the last count there were 1542 of them [in the UK, Republic of Ireland and the Isle of Man]”. Alan Dawson, 1992

Today’s list has increased to 1556 due to more accurate measuring techniques. You can search the list by country or county which makes it easy to concentrate on hill bagging in the lowlands:

Where Are The Marilyns?

The beauty of Dawson’s list is that Marilyn Hills don’t have to be a minimum height above mean sea level, unlike Scotland’s Munros (3000 ft), for example, which means the hills of lowland Britain get a good look in. The only requirement is that a hill is 150m (500ft) high with a 150m drop on all sides, which makes it a prominent feature in the landscape. This means that a distinct hill that’s just 150m high with nothing else around it will count as a Marilyn, and some significant Munros won’t.

The original list was published in The Relative Hills of Britain (Cicerone Press, 1992), which is currently available on Amazon for an exorbitant price (because it’s out of print).  A better bet for any budding hill bagger is Dawson’s website which includes excerpts from the book as well as more recent information, including revisions to the list. (Discover the first woman to tick off all the UK’s Marilyn hills in 2016)

Cornwall boasts 5 Marilyns across the county, which is the same number to be found on the Isle of Man. Brown Willy is the best known and rises to 420m above sea level, laying claim to Cornwall’s highest point:

Check Out My In-depth Guide To Walking In Cornwall

Carnmenellis rises in the Wendron district of the Cornish Mining World Heritage Site. There’s a public footpath around the bottom and the hill itself is open access, but the paths to the top are barely there. If you decide to make the effort you’ll find yourself scrabbling through gorse and bracken, so make sure you wear long trousers. When you make it to the summit you’ll discover a less than beautiful radio mast got there before you! The trig is the highest point.

Or…Why Not Try A More Attractive Walk From Nearby Redruth!

Carnmenellis hill aside, there are some good walks to be had in this area of the Cornish Mining World Heritage Site. I put together this 8-mile circular walk, from the easily accessible centre of Redruth. 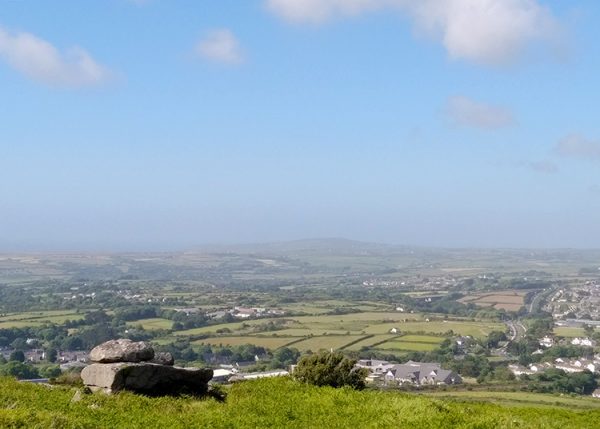 Head here for the directions and maps:

Hensbarrow Downs replaced Hensbarrow Beacon as the highest point in February 2017. The highest point is now described as “embedded rock in long grass” and is accessible from paths on nearby roads. It’s a pretty bleak place near the village of Stenalees in the heart of Cornwall’s china clay industry. It’s surrounded by iconic china clay mine spoils (dubbed the Cornish Alps by locals) and not so iconic radio masts.

If you’re in the area for hill bagging, great, if not I recommend a walk in nearby Luxulyan Woods (SX 055572) to see the much more impressive Treffry Viaduct. 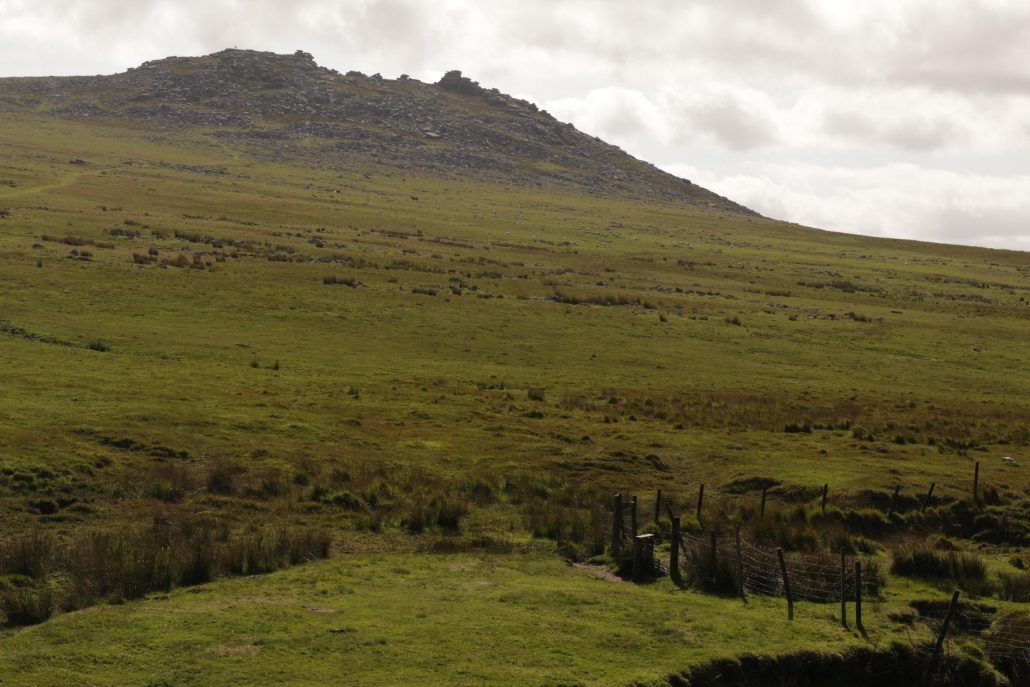 Brown Willy, the highest hill in Cornwall (above, and main image), is on the north of Bodmin Moor (the name is thought to derive from the Cornish Bronn Wennili, which means ‘hill of swallows’). The Moor feels like a wild and empty place, desolate under quickly changing skies, with Brown Willy brooding over it. The featureless plateau and rocky granite outcrops belie the history of the people that have shaped it over thousands of years. There are prehistoric burial sites, bronze age stone circles, standing stones, hut circles, and medieval field systems scattered across the landscape. And the commons are still used for grazing today.

Peaty bogs and low cloud or rain are characteristic of the area and some of Cornwall’s main rivers rise here. The River Fowey (pronounced Foy) empties into the English Channel at the village of Fowey on the south coast and the Camel empties into the estuary at Padstow on the north coast (both worth a visit). The unique environment means that it has been designated an Area of Outstanding Natural Beauty (AONB), with a number of Sites of Special Scientific Interest (SSSIs). The SSSIs protect habitats and environments across the moor, which makes it a fascinating place for walking and hiking.

The hill is easily accessible from a public car park south-east of Camelford. When you come from this direction you have to cross Rough Tor first (20m below Brown Willy) before you climb Brown Willy to the southeast.

If you enjoy trail running you can join the annual 7 mile Brown Willy Run on New Year’s Day (from Jamaica Inn), which is organised by Truro Running Club. It’s a great way to grab the Marilyn on a fully marshalled route.

East Cornwall offers some lovely walks around Kit hill, a 400-acre country park situated between Bodmin Moor and Dartmoor. Fantastic views open up from the top, so it’s well worth bagging!

Once you’ve finished hill bagging you can enjoy a circular walk and the wildlife of the heath. There are also old tin mine and quarry workings, prehistoric barrows and horse riding trails to explore. 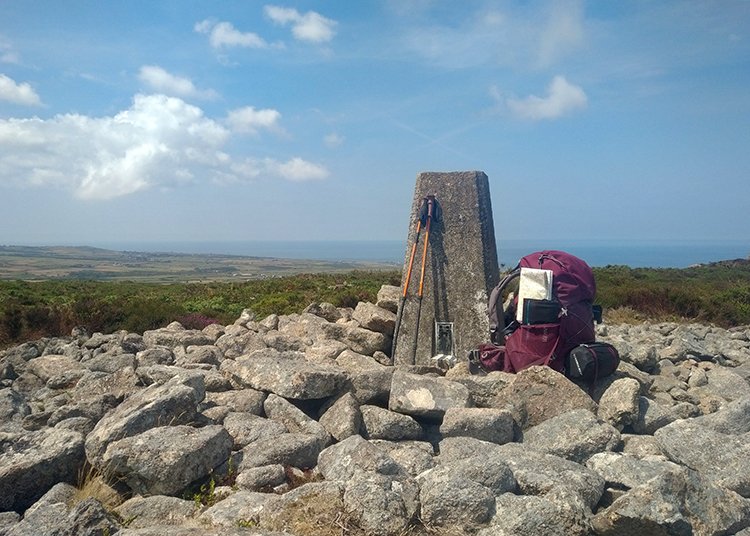 Watch Croft is in the far west of the county in an area called West Penwith. It’s near Rosemergy, which is a short distance from the South West Coast Path on the north Cornwall coast. On a clear day there are fantastic 360-degree views, which make it well worth a detour from the coast (3/4 mile). Drivers can park on the B3306 near Rosemergy either at Carn Galver Mine or just past it to the west. 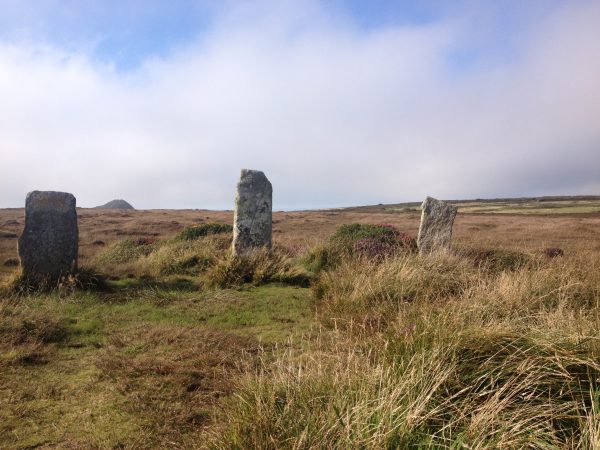 Part of Nine Maidens Stone Circle with Carn Galver on the horizon.

West Penwith is a fascinating area to visit for its many well-preserved prehistoric sites. It’s definitely worth devising a long walk or even staying a few days to explore. Just a short distance from the top of Watch Croft is a 6 foot standing stone (menhir) and a settlement of roundhouses. To the southeast you’ll find Men Scryfa, an inscribed standing stone, nine maidens stone circle and the Men-an-Tol holed stone. There are plenty of tracks on the ground to connect up to make a good circular walk.

West Penwith has a lot of Open Access areas, which means you can roam wherever you like. Protect your legs though because bracken and bramble grow like mad and the tracks can be overgrown.  A map, compass and warm clothes are essential at any time of year because the weather can change very quickly. Check the weather forecast and choose a fine day for fine views or soak up the enigmatic atmosphere in the mist.

Hill Bagging In Cornwall: My Favourites

What makes a good walk? Atmosphere and wildness are at the top of the list for me, which means

The best of Cornwall’s Marilyns are Brown Willy and Watch Croft, without a doubt!

Don’t just go hill bagging though, make a day hike and soak up the remoteness and big skies, immerse yourself in a landscape with human history that goes back thousands of years. It’s an experience you won’t forget.

Which One’s Your Favourite?

Is it in Cornwall or further afield? Let us know in the comments and if you’ve got any tips or favourite routes to share we’d love to hear those too.

Chipping Campden – A Walk From Moreton-In-Marsh

Best Walks In Cornwall – Plus 12 Reasons You’ll Love Them!

If you've you've found inspiration or love my guides please support me on Ko-fi. (I spend a lot of time writing in coffee shops!)