24 May Mevagissey: 17 Miles Of Cornish Sunshine

Posted at 07:00h in Cornwall, Walking and Hiking by Stephie 0 Comments 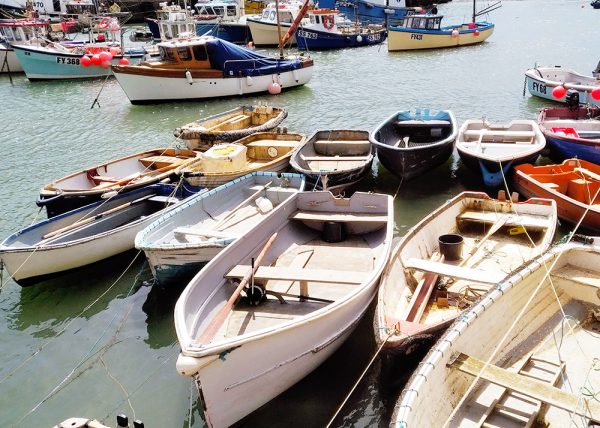 Mevagissey is one of those popular fishing villages on the south Cornwall coast that I generally give a wide berth. It’s a lovely place either end of the season, but I don’t like the summer crowds. However, Mevagissey on a glorious spring day is a completely different kettle of fish…

Let me introduce you! Hana is a very good friend, and one of my only friends that walks more than 10 miles on a regular basis. So, when Hana suggested a day hike I jumped at the opportunity. It’s not often we get to walk together, so I asked her to take me on one of her favourite routes. And this one happens to include Mevagissey.

Hana’s walked this route a couple of times and it includes typical Cornish countryside, quiet lanes, fields and a stretch of cycle path. The jewel in the crown though is undoubtedly the section of coast path from Porthpean to Mevagissey. It’s about 5.5 – 6 miles of spectacular cliff walking on one of the most challenging and demanding sections of the South West Coast Path. That means steps. Up. Down. Up. Down. Ad infinitum. It’s not for the unfit, or anyone that values their knees. (The entire route has 2,151 metres of ascent, but most of it’s on the section of coast path!)

London Apprentice is a pretty nondescript village near St Austell, but it’s a convenient place to park for the beginning of the walk. I had no idea where we were going so I just put my faith in Hana and trotted off behind her. She looked the part with map in hand and a walking pole (I forgot mine), but it wasn’t long before we were ‘off track’ at the top of a hill with lovely views. Still, it’s good to go with the flow sometimes and enjoy the unexpected benefits of a ‘minor detour’. Basically because we’d been talking too much. 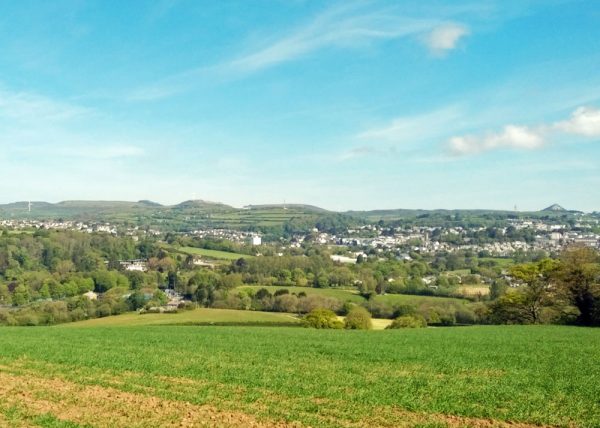 It got me thinking about the difference between walking solo or with friends. One of the pleasures of solo walking is having the freedom to do what you want, to take a detour simply because you feel like it. You can spend time chasing butterflies or watching the waves without worrying about what anyone else thinks, which is liberating.  But I sometimes forget what it’s like to walk with a friend that has a similar outlook. Someone like Hana for example. She’s equally as happy to stop every 5 minutes to take a photo of something beautiful or intriguing as I am.

The First Part Of The Walk (click to enlarge the images)

The beginning of the walk

And we walk at about the same pace and are both pretty fit (here comes the qualifying statement!) for a couple of middle aged women. (Which is still fitter than most people in their 20’s!) You don’t need to be super fit for the first couple of hours easy walking on this route, but don’t let that fool you. As soon as you hit the coast at Porthpean you’ll need your glutes and quads on good form. Or it’ll take you a week to get to Mevagissey!

Not So Easy Walking…

The tide was in at Porthpean and the smell of the sea hits you like the smell of cigarettes does for an ex smoker. It’s a heady mix of salt and seaweed and instantly conjures up memories of childhood. It’s like a drug and once you’ve experienced it you crave it if you haven’t had it for a while. We both inhaled deeply and drank it in. Then started the warm up for the legs. 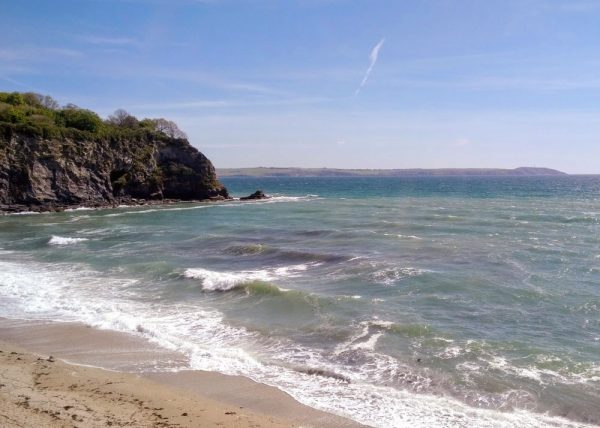 The Rat Run Through Mevagissey

Interestingly this 6 mile section of the coast path is both at the beginning and end of a series of tough trail races called The RAT (Roseland August Trail), that attract runners from all over the UK. Hana’s run a couple of the available distances a few times – and vowed never to do it again. And I’ve run one of the distances in preparation and got injured beforehand, but trust me, it’s no more difficult if you walk it or (try to) run it.

Look closely, or enlarge, to see the flight of steps heading up the cliff on the left

It’s hard to describe how challenging this section is and photos don’t do it justice. But the fact is that the terrain is hard, and coupled with it’s remoteness (there’s nowhere for 5 miles between Porthpean and Pentewan) it means you’ll often find yourself out there on your own.

So we were surprised at how many hikers we met that day, resting at the top (or bottom) of one series or other of near vertical steps. They were red faced and dripping, catching their breath ready for the next onslaught. But you know what? Not one of them was under 40. And several of them were women. I’ve got no idea why this was, but it just goes to show that

gender and age are no barriers to adventure and challenge

Luckily there’s plenty to distract the weary hiker from the terrain at this time of year. The spring brings bluebells that stop you in your tracks and the sea looks tropical (it isn’t!). Foxgloves are beginning to open and bees and butterflies are having a feast. And most importantly of all, the cafes are open in Mevagissey!

First sight of foxgloves in flower this year

Getting closer to Mevagissey

Blue hillsides on the cliff path above Porthpean

We’d sat and eaten our lunch in the small village of Pentewan, about a mile and a half outside of Mevagissey, so by the time we rocked into Meva we were ready for coffee and cake. And if Hana’s known for anything it’s her nose for a good cafe. She lead me into She Sells, which is right on the harbour side overlooking the fishing boats. Two cups of coffee and a glorious brownie later and we were ready for the final stretch back to the car.

There were a couple of steep hills on this leg, especially around Heligan where the open views are worth the effort, but most of this section is on beautiful woodland tracks. They vary from the steep, narrow and gnarly to the broad and level section of the Pentewan cycle trail. This popular trail runs along the bottom of the valley beside the St Austell River, which was sparkling in the broken light under the trees. And after the exposed sun on the coast path it was bliss to be in the shade.

Spring is one of my favourite times to walk in the woods, when everything seems to be bursting into life. Or song. The sharp greens of new beech leaves draw my eyes up and fill me with hope. While under the canopy the bluebells and wild garlic vie for attention. But it’s the birdsong that really fills my heart. And there was plenty of it when Hana and I passed through.

The miles slipped by quickly and it was a surprise when we reached the car. There was so much to see and hear along the way, and we may have hiked 17 miles but we could both have carried on. It was a glorious day and I’d recommend Hana’s hike to anyone.

Enjoyed the read? Why not subscribe to the blog and get a notification when a new post is published? Just leave your email address in the right hand column and leave the rest to the magic of the internet! It’ll be lovely to have you join us.
Please follow and like us: