Holywell Bay To Agnes On The South West Coast Path

Why Hike The South West Coast Path? Because It’s On Your Doorstep!

It wasn’t until 2014 that it dawned on me there are 300 miles of the South West Coast Path National Trail on my doorstep that begged to be hiked. A plan to began to form, but it wasn’t my idea…

It was early January 2014 and I was looking for a new challenge. I loved running (I wasn’t a natural, just a plodder), but a demanding 28 mile trail marathon on the South West Coast Path in south Devon left me with a serious case of Achilles tendonopathy. And that was my running ambitions dead in the water.

I was climbing the walls; a ball of coiled energy and frustration. Then someone had a bright idea. That someone was Katie, a friend and fellow injured runner, and her idea was to section-hike the South West Coast Path in Cornwall.

I’d walked most of the Coast Path in Cornwall in ad-hoc fashion over the years, but never as a continuous trail. My challenge-radar was piqued and a long journey began.

The Challenge Of Where To Begin

Katie and I sat in dim light beside an open fire in the local pub in St Agnes and pored over a pile of maps. It was chucking it down outside. We thought Land’s End looked like a memorable place to start as  it’s  only 35 miles away from St Agnes (where we lived). The idea turned out to be a logistical nightmare, thanks to a serious lack of public transport. It turns out that the bus services are crap at best in Cornwall and non-existent at worse, and it was a regular issue along the entire route. But those were problems still to come.

With Land’s End off the table we decided to start our first section-hike much closer to home. Our first 9 miles would take us from Holywell Bay, (south west of Newquay) to Trevaunance Cove in St Agnes.

Strong winds were battering the coast with 50mph gusts on the day we started our section hike. It’s an exciting experience in those conditions on the exposed cliffs between Holywell Bay and St Agnes and we both confessed to a few nerves.

We took a bus over to Holywell, taking along Katie’s two dogs, which takes about half hour from St Agnes, and the weather got worse the closer we got. When we arrived the driver suggested we sit in the 13th century inn in the village and he’d pick us up on his way back. It was tempting: heavy rain pounded the windscreen. Hard. And cold.

A narrow track rises above the bay from the back of the large expanse of Holywell beach, above reed-filled ponds and sand-dunes, which leads to a breathtaking view of Carters Rocks, pushed up through the sea like twin black cones. It’s an iconic view, but the waters are treacherous and the remains of a 1917 wreck can still be seen on the beach. 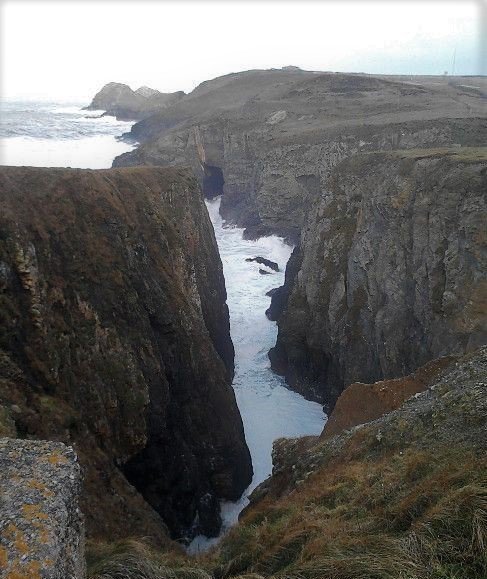 At the top of the path we rounded Penhale Point onto the cliffs and the full brunt of the wind surged into our bodies knocking the breath out of our lungs; hail stones struck our faces like a barrel full of shot, all at once putting us in the firing line of a raging, stormy winter’s day. 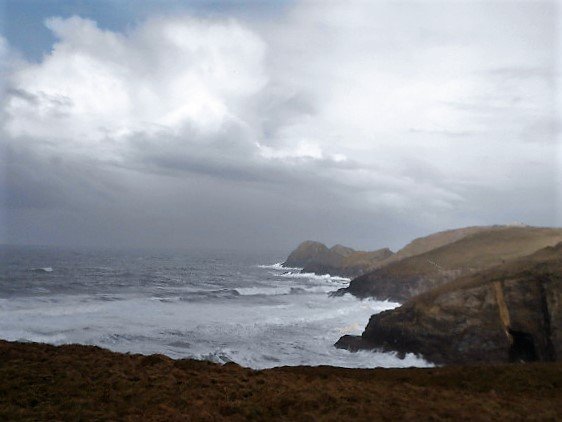 Spume swirled above us, soft as snow, forced upwards by waves that pushed through the caves below. The dogs chased it, like children catching snowflakes.

A desolate MOD training camp skirts the edge of the coast path at Penhale and ranks of fenced off WW2 Nissan huts keep the curious walker at bay, trapped on a narrow track between barbed wire and the churning sea.

The risk of being blown over the cliffs was palpable, so the dogs were put on leads and Winnie, the old lab, was as good as an anchor until we got to the safety of Perran Beach.

Perran’s a stunning beach, over 2 miles of soft sand from Perran at one end to Perranporth at the other, banked by Penhale sands, 3 miles of dunes that stretch from Holywell Bay to Perranporth.

The beach was empty, but people leave traces wherever they go (even where they don’t) and the strandline was full of incongruous brightly coloured plastic. Vast amounts of it gets washed up by winter storms, everything from large plastic barrels to tiny beads gorged out by the sea. All of it a mortal danger to wildlife. (Learn how you can Leave No Trace and do a #2minutebeachclean.)

The days of softly coloured sea glass and smoothed driftwood seem to be a thing of the past, but Winnie managed to find a log to carry and looked hopefully at us. Polly, Katie’s part greyhound puppy, raced around like she was on speed.

We stopped for lunch at The Wateringhole, down at Perranporth, “the only bar on the beach in the UK”. It was closed that day so we pitched up at a picnic table on the sheltered veranda, took out our sandwiches and watched the occasional red-legged runner go past battling the wind.

It’s a whole different place on a balmy summer’s night when it becomes a gathering place for the day’s surfers and sun-worshippers. Loud, bustling, filled with hoards of summer tourists, huge tv screens and live music; you’d never know how fragile it is in winter, susceptible to flooding and being buried under storm blown sands. It’s had to be dug out on several occasions over the last few years.

There are steep cliffs to climb out of Perranporth, with endless stone steps that burn the legs and lungs of the uninitiated. And there are more to come at Trevellas Combe.

The ground changes from muddy, sandy paths to loose stony tracks that wind their way around an increasing number of tin and arsenic mine workings. The cliffs at Cligga Head are stained red with iron, pockmarked with tunnel openings high above the beach, with an impressive protrusion of greisen rock that towers above the coast path, folded and veined like a closed fan.

The path drops down steeply into the combe at Trevellas where you can explore the old buildings of Blue Hills mine, but at this point we were only a mile or so from the end of our first hike and hanging around in the freezing cold didn’t seem like a lot of fun, despite the prospect of the energy sapping trek up out of Trevellas.

Katie made it look easy enough and told me about a technique she learnt from a fell running instructor in Snowdonia. The trick is to really engage the glutes, she said. I thought a better trick would be to sit down and just send her off for mule.

When you finally get to the top of the cliffs with your legs screaming it’s an easy mile or so walk to the next cove at St Agnes, past Wheal Kitty and its surreal mine spoils, to a junction of paths. You can either head down into the cove and the welcoming Driftwood Spars, an old pub that serves craft ales and cider made on the premises, or take the other track back up into the village with all its amenities. We headed back to St Agnes village and the warmth of Katie’s kitchen, where the dogs crashed out and we drank hot coffee, totally exhilarated.

It turns out you don't need to start a section-hike somewhere with a memorable name after all. Just stick a pin in anywhere along your route and get out there, because you'll never forget your first day. Especially one like ours.

It was invigorating; the quickly changing weather added more drama than you’d get in a production of Hamlet. One minute we’d have our heads down with our hands sheltering our cheeks from the whipping rain coming in off the sea, and then as it passed we’d look up at a rainbow and a vast horizon that stretched on for miles.

It’s a dramatic stretch of coastline with moderately challenging terrain in places and plenty of stunning views and interest all the way. And in the winter months you can pretty much claim all that expansiveness for yourself.

Penhale Sands is the largest sand dune system in Cornwall, home to numerous rare plants including lichen and mosses, and a designated Sight of Special Scientific Interest (SSSI). The conservation area within the army camp is particularly rich, due to years of restricted public access. Cornwall Wildlife Trust manage the site today.

Venture off the beach for a wander in the dunes and you’ll discover the remains of St Piran’s Oratory, an early Christian chapel that was buried in the sands for centuries. St Piran is the patron saint of Cornwall (and tinners) and the Chapel marks the spot he reputedly landed on the Cornish coast. On a millstone all the way from Ireland. As you do.