The South West Coast Path has some fantastic beaches, but the great stretches of endless sand around St Ives Bay must be some of the best, and without doubt the most iconic. Katie and I embarked on this walk in outstanding winter weather. It was a bright, crisp day under a vast blue sky, a welcome relief after the devastating storms of previous weeks. We were excited to get going; walk 5 of our section-hike along the north Cornwall coast path was full of promise.

We picked up where we left off and this time the views of Godrevy lighthouse were crystal clear.

It was low tide and bright sunshine when we stepped onto Godrevy Beach. Katie put her sunglasses on, big Jackie Onassis style that made her look cool as fuck. We passed a group of coastguards out training and I noticed she wasn’t wearing her bright pink ski jacket this week. I, on the other hand, looked as tragically scruffy as ever and hadn’t given sunglasses a thought.

I’d heard rumours the main steps off the beach had collapsed, eroded by the recent storms, so we went up into the dunes to avoid being cut off by an incoming tide. And, if worse came to worse, it would save the coastguards the embarrassment of explaining why they’d rescued Katie and not even noticed I was there.

The sea dipped in and out of view as we hiked through the wind-blown barrier and looked towards the horizon. There were people walking their dogs along the surf so we assumed there must be another path back into the dunes down towards Hayle. We slid down onto the beach again on our arses and someone kindly pointed out a distant coastguard lookout where we could get back up to safety “with a bit of effort”.

The wet, rippled sand stretched straight ahead of us for a couple of miles and St Ives Bay felt like a different world. It’s like a foreign country when the sun’s shining, but that’s got nothing to do with the heat of the day (or lack of it); it’s the clarity of the light reflected back from the sand and the dazzling sea that makes it feel exotic. The sky was vast that day, arcing the land and sea like an azure blue umbrella, but the closer we got to the black cliffs at Hayle the more the visual feast seemed like a mirage; one that was about to be shattered.

The lighthouse marks a treacherous reef off Godrevy Point. The reef, known as The Stones, caused many shipwrecks and loss of life, but it wasn’t until the tragic wrecking of an iron steamer that the lighthouse was built; The Nile went down in 1854 with the loss of all 40 passengers and crew.

After further petitions to Trinity House, Godrevy lighthouse was finally built on Godrevy Island and operating by 1859. There were always two keepers on the island keeping the light alight until 1939 when it was modernised and automated. The lighthouse was converted to solar power in the late 20thC and modernised again in 2012 when the light was removed from the 26m tower onto to a steel platform on an adjacent rock. The old white octagonal tower is still maintained as a ‘day marker’, which you can easily see from all around the Bay.

And of course, the view of the lighthouse from St Ives is acknowledged to have inspired Virginia Woolf’s novel To The Lighthouse.

Porth Kidney Sands, looking back across the Hayle Estuary towards Godrevy (hover over the image for info about the lighthouse).

The Hayle River flows quickly and deeply across the beach and you have to head sharply inland to avoid it, unless you’re prepared to wade across a broad expanse of freezing, knee-deep water at low tide (it’s impossible to walk across at any other time). This inconvenience made the next 3 tarmac-trudging miles as dull as dishwater. We followed the edge of a fast, busy road between Hayle and St Ives accompanied by the inevitable sounds and smells of traffic. The only reprieve was passing over the Hayle Estuary RSPB Nature Reserve, billed as “the most south westerly estuary in the UK”.

We stood on the road bridge for a while and watched thousands of overwintering birds on the mud flats. There were grey heron, little egrets, cormorants, geese…so many that I didn't know the names of, to my shame.

It’s a birdwatchers’ paradise, although we only saw one old couple and a young child braving the fumes and the noise with their telescopic lens. If we’d had more time it would have been worth a wander to find the hide to make the experience more pleasurable. As it was it was a relief to get off the main road and onto the quiet lanes to Lelant before we picked up the coast path again.

This next section closely follows the St Ives branch line from Lelant to Carbis Bay and also forms part of another trail called the St Michael’s Way (trip report). Katie and I ducked under a single arched railway bridge and Porth Kidney Sands stretched out below us. A barbed wire fence ran alongside the railway line beside the South West Coast Path, which was narrow enough to force us to walk in single file. By the time we got to Carbis Bay a bank of grey cloud had developed.

We came across a large grey seal that had been washed up on the beach at Carbis Bay. Its body was covered in bloody wounds and it had translucent, mottled skin, like it had been battered and tumbled in rough waves. I wasn’t sure I’d seen a sadder more lonely sight, but it triggered a deep curiosity in me.

The face appeared to be decaying more quickly than the rest of its body and I wondered what its skull would look like, whether it would be interesting to draw. But I’d need a chain saw to find out. And no sense of smell.

I don’t know what happened to the body, whether it was washed back into the sea or recorded and removed by the Marine Strandings Network, but it was difficult to leave it behind, alone and out of place.

Carbis Bay runs seamlessly into St Ives and it wasn’t long before we rounded into the town, greeted by noisy, bullish herring gulls.

St Ives is relatively peaceful in March, so it’s a favourite time to visit. It feels as though it’s just shaking off the winter sleepiness and taking a stretch ready for the summer influx of listless families and screaming kids dripping with ice-cream. The town and the harbour, the beaches, they all have breathing space around them in winter.

People flock to St Ives in summer for the miles of sand and to explore the pretty town that runs along behind the harbour. 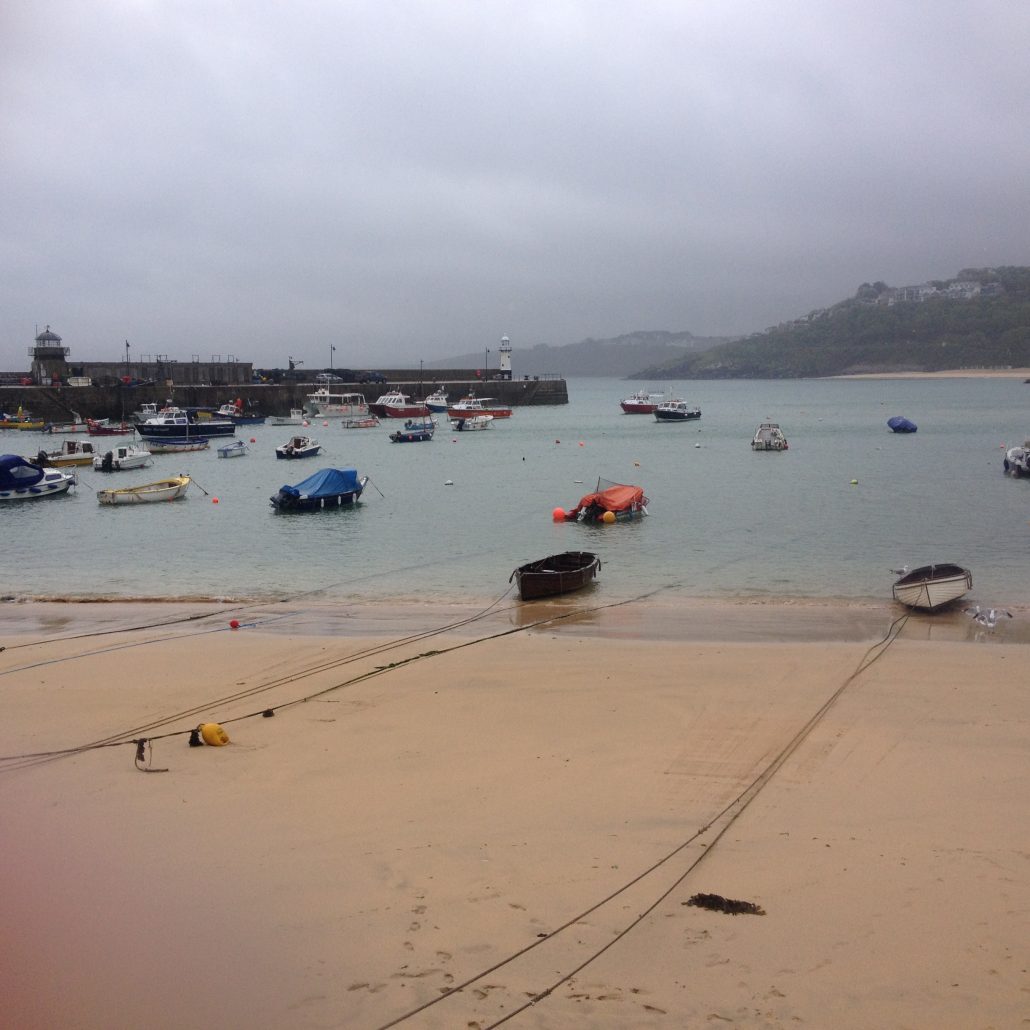 It's steeped in nostalgia, like stepping into one of those 1930's railway posters where the sea and the sky are always blue and benign.

There are sepia photos of ‘old St Ives’ everywhere, inviting you to compare then and now in a favourable light, because nothing has changed. It’s an illusion of course.

The squalid fisherman’s cottages stacked up against each other along steep narrow streets, once stuffed full of large families in a few spare rooms are now light-filled summer homes or holiday cottages stuffed full of families with money to spend. St Ives offers visitors a bevy of restaurants, cafes, galleries and tasteful gift shops, exotic gardens and high culture at Tate St Ives. It feels like one of Disney’s fake holiday villages.

The doors to the holiday homes are firmly locked throughout winter and ‘real life’ goes on high above the town in the estates and cul-de-sacs where there are no sea views. The people have been shunted away into the modern ‘rabbit-hutch’ equivalent of the quaint cottages down below and the town goes back to what it really is, somewhere sleepy at the end of the earth, remote, hunkered down under wild weather, a bit desolate: somewhere pretty special.

Katie and I wound our way up to the car park, feeling good.