Walking from Newquay to Holywell Bay felt wrong. Very wrong indeed. Hike number 6 should have started where we left off in St Ives, in theory, but sometimes things have to change change.

Katie and I began the UK’s longest national trail in Cornwall at Holywell Bay with the intention of walking westwards (sea on our right all the way!). So far we’d walked about 35 miles from Holywell Bay down the coast to St Ives. Progress was slow because of winter storms and was about to get more difficult due to lack of time: we only had 6 hours for each walk, including travel. Hiking beyond St Ives was hardly worth the effort, so we had a rethink and came up with a new plan for walk 6.

I got over it (I think!) and this hike turned out to be the most memorable so far.

It was a beautiful day, clear and sunny, if a little windy. We walked along a tarmac footpath along the cliffs above Lusty Glaze beach and headed towards the town centre, a place “stuck in the 80’s” as Katie aptly described it.

I hate Newquay with its shabby, littered streets and seedy reputation and avoid it like the plague. The only thing it's good for, in hiking terms, is to refuel or board a train to somewhere else. There's no denying the coastline is spectacular though, and far more beautiful than I'd remembered.

A succession of endless bays are demarcated with dark rocks that slash out into the wide bay, like bony fingers pointing to the horizon. I could watch the waves roll in for hours, but the town has bullied itself to the edge of the strandline and there’s no choice but to walk through the streets, dowdy and run down in winter and gaudy as hell in summer. We grabbed a takeaway coffee and headed down a side street to the harbour. The tide was low and a long way out, which meant we could walk among the brightly coloured fishing boats because they weren’t going anywhere.

Massive chains sagged across the beach and seaweed and limpets clung to the stone of the harbour walls way up above our heads. It felt like being in an empty bowl with the smell of fish soup hanging in the air. There were bits of unidentifiable skeletons all over the place, decomposing fish and crabs. “Is this what I think it is?” asked Katie excitedly as she prodded at something lying in the sand. I turned it upright, yes it was: a small, decomposing shark, a watery steel-grey with the skin rotted away in places, less than a metre long. It wasn’t something either of us expected to find on the shore. The sleek shape, smooth skin and iconic dorsal fin, strike wonder rather than terror in a fish this size.

A bit further along the coast, past the curious Huer‘s Hut on the outskirts of the town, we watched a seal bobbing in the waves close to the rocks below, flocks of gulls in tow. The horizon felt close, broken by the shadowy shapes of boats. 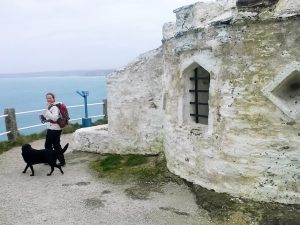 Cornwall relied on its fishing industry in the past and pilchards provided a significant income for a lot of people (the pilchard is still on the town’s emblem). Every fishing company employed a Huer to keep lookout for shoals of pilchards along the coast, and ‘huer’s huts’ provided them with shelter.

In Newquay the old whitewashed Huer’s Hut still stands prominently on Towan headland looking out across Newquay Bay. A hut has been on the site since the 14th century, but the stone building here today was built in the mid 19th century (huer’s huts were more commonly built of wood).

When a shoal was spotted out in the bay the Huer would cry to the small fleets of fishing vessels through a trumpet-like megaphone and direct them to the shoal with furze wrapped in cloth, using a similar method to semaphore. The catch was brought into Newquay Harbour.

The hut offered basic shelter, plus a grate and cooking facilities, to the huers who would be on lookout whatever the weather, over long hours day and night. It was a competitive business and the Newquay huer’s hut had the added advantage of a set of outdoor steps to the top of the building for an even better view.

The tide was at its lowest point when we came round the coast to Crantock where the River Gannel flows into the estuary and out to sea. It’s a fast flowing river that cuts across the beach so we walked inland on yet more tarmac roads, lined with 20th century bungalows, and looked for a safe place to cross.

A footpath lead down onto the rocks that line edge of Crantock estuary to a long wooden bridge, a boardwalk that crossed the water and tide-rutted sands. The South West Coast Path snakes up the headland on the other side, but rather than climb up the cliffs we decided to scramble over the rocks and walk along the sands to the expansive beach. The mouth of the estuary was a wind tunnel and it rushed towards us bringing stinging sands.

Katie told me that Crantock Beach reminded her of the desert and made her feel like we were going on an adventure. She grew up in Kuwait and would go into the desert with a group of friends in a 4×4, take a bbq and slide down the dunes in cardboard boxes. They’d hunted scorpions like I’d fished for minnows in the local brook.

We imagined what it would be like to see a camel on Crantock beach (I’ve seen weirder things); the horizon was blurred through the blowing sands and the mirage wasn’t difficult to visualise.

She was telling me that as soon as the sun goes down in the desert it becomes freezing cold. I was transfixed by her exotic stories as I watched the fine grains blowing towards us, lifted inches above the beach and making beautiful eddies and patterns – mini dunes in themselves. This was the most special part of all of our walks so far, the most memorable.

The sand along the riverbed was pockmarked, cratered in places, where the incoming waves had flowed across. There were ripple patterns that probably tell secrets about the movement of the tides to those in the know. The sands were soft and occasionally, unexpectedly, we’d sink ankle or shin deep.

Out in the bay the sand was hard and firm again and surprisingly there was hardly anyone about, just one other man walking across the beach some distance away. Katie’s two dogs made a beeline for him. Especially Polly, the greyhound, running in wide arcs to and fro again and again until we finally reached the other side of the beach and climbed the steps up the cliffs to the coast path.

The Final Leg To Holywell Bay

There were curt notices along the cliff path to keep dogs on leads or risk them being shot if they bothered the grazing sheep that dotted the adjacent fields like little clouds.

A tractor ploughed back and forth in the distance and we headed up over the hill, across another bay cut into the cliffs at Polly Joke, and finally down towards Holywell Bay with its distinctive twin rocks, little islands like black shark fins swimming in the bay.

Steep dunes line the bay at Holywell and we decided to head down to the beach for the final walk back to the car. We ran down at full pelt laughing all the way. I wished I had a cardboard box; that would have been the perfect end to the perfect walk.

Instead I made do with a poke of a washed up guillemot, another casualty of the recent storms.

Many thanks to Katie for letting me use her photos.