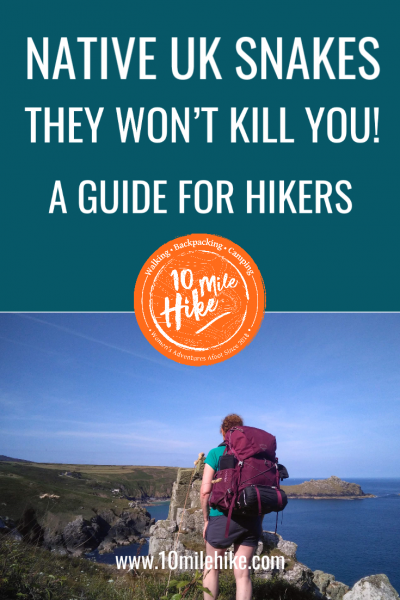 Are They Harmless Or Venomous Snakes?

A Guide To Native UK Snakes For Walkers And Hikers

Is your spine a-shiver at the mere thought of our native UK snakes? What would you do if you saw one on your walk, run off, jump for joy? Well don’t run, read on!

This guide to our native snakes and slow-worms (which are often mistaken for snakes) will help quell your fears and fill you with wonder instead. Trust me, I’ve met a snake or two!

What Snakes Do We Have Here In The UK Then?

The UK is home to 3 native Snakes and A Legless Lizard!

The UK is home to 3 distinct native UK snakes – and the slow worm (which is actually a lizard!). Let me introduce you to:

All 4 of these species are protected under The Wildlife and Countryside Act 1981, which means it’s an offence to intentionally kill, remove them from the wild, offer for sale, advertise for sale, transport etc. Check out the link for further information about the law.

How To Identify Native UK Snakes…

And The Slow Worm!

Slow Worms – Anguis Fragilis (It’s Not A Snake, Or A Worm!)

Slow worms are beautiful, silvery, ‘glisteny’ creatures (although juvenile slow worms can be more golden in colour). They’re small, (an adult is around 40-50cm long) and neat, their heads barely differentiated from their bodies. 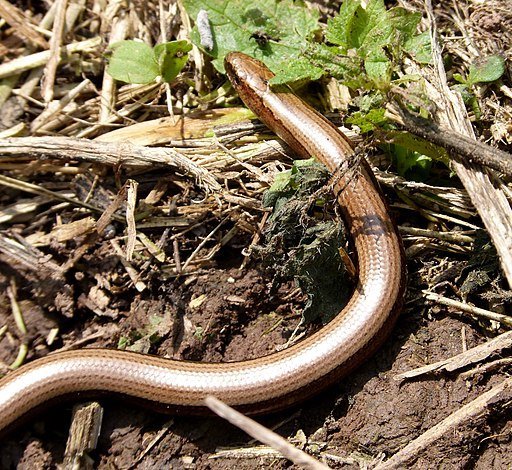 Slow worms eat slugs and worms, so can often be found at the bottom of your compost heap. They live in burrows, under rocks and logs which are found on heathland, at the edge of woodland and in longer grass where invertebrates are plenty (which includes The South West Coast Path where I’ve spotted many a specimen!). They’re active mostly at twilight and dusk, so keep your cats in at night as they’re one of the slow worms’ main predators. You might see them sunning themselves through the spring and summer, but they usually hibernate between October and March. They can be found across Great Britain, but not in Northern Ireland.

Should I be afraid of Slow Worms?

The easiest way to identify a grass snake is by its yellow and black neckband and round pupils; it also has very distinct black bars along its sides.

Male grass snakes can be a metre long and females up to 1.3m. Overall they’re generally olive green in colour. 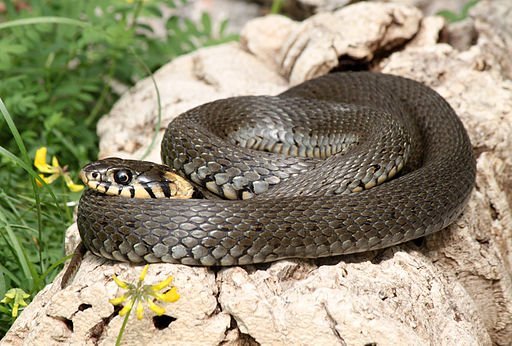 Grass snakes eat amphibians like frogs and toads so you’ll find them in wetlands near standing water (ponds, lakes etc) throughout England and Wales (they’re not found elsewhere in the UK). They hibernate between October and April so you’re unlikely to see them then, unless you find one in your compost heap!

I saw my first one on a local bike trail through old mine workings here in Cornwall on this Coast to Coast walk) where there are plenty of ponds. It was an extraordinary encounter; it seemed to fly across the track in front of me at the speed of light. (Probably not that fast, but you get the picture.) I was so excited to have seen it I could barely contain myself for days!

Should I be afraid of Grass Snakes?

Nope, not even a little bit. But leave them alone and avoid a scary hissy fit.

This is the rarest snake in the UK.

Its’ a slim snake and the female grows to about 70cm. It has round pupils and a double row of brown or black spots along its back. Sometimes the spots appear joined and look more like horizontal bars. Overall its a brownish or grey colour. Young snakes have a completely black colour head. 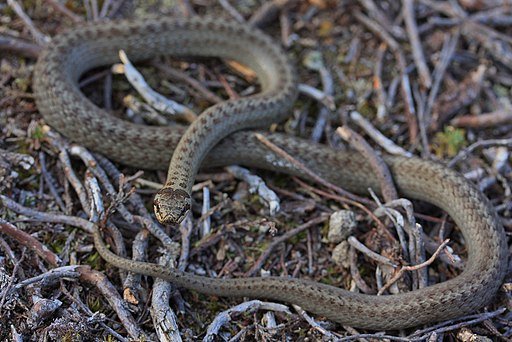 Should I be afraid of Smooth Snakes?

Come on now, are you planning to stick your unprotected hand down a hole in the ground?! No, thought not. If you’re lucky enough to see one though be cautious: they can bite and draw blood if they’re threatened, but they have no venom. They’re very rare in the UK and where they are present they spend much of the time underground so the likelihood of being bitten is negligible and even then really only likely if you try to handle one. Just remember not to stick your hand down a hole.

Meet the Adder, the UK’s only venomous snake (not a man in tights).

It’s probably the most distinctive of our native snakes with its slit eye and dark zig zag stripe down its back, as well as its characteristic thick, stocky body. The female grows to about 70cm in length and is generally grey/brown in colour overall. 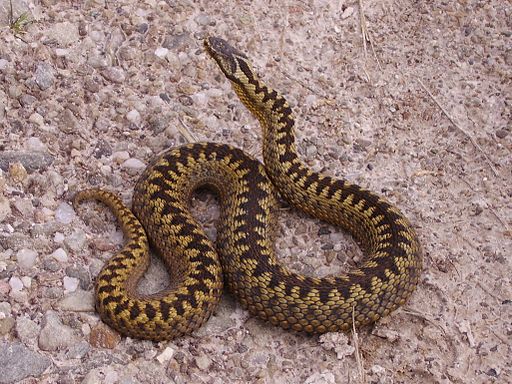 The adder feeds on small birds, mammals, amphibians and lizards that are found in open heathland and dense woodland. It’s widespread across Great Britain (none in Northern Ireland) and is Scotland’s only native snake. It’s considered to be a vulnerable species in some areas.

Should I be afraid of Adders?

Nooo! Don’t be fearful, be full of wonder. And maybe a bit cautious (especially if you’re nuts enough to wear flip-flops walking across heathland!): they can give a venomous bite if threatened (trodden on for eg, although they’re more likely to give a ‘dry bite’). 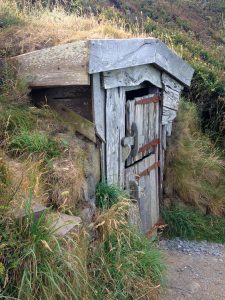 Last time I saw one was on the South West Coast Path National Trail in 2017. It was sunning itself on some rocks early one morning near Hawker’s Hut (which is the National Trust’s smallest property) at Morwenstow. I was so excited to see it, but while I fumbled about trying to get my phone out for a photo it just slithered off into the undergrowth.

That’s the thing about adders, they’re not interested in you unless they perceive you as a threat. Most adder bites occur when they’re stepped on, or because you try to handle them (which accounts for many a bite on the hand).

If you’re unfortunate though and do get bitten, don’t panic and don’t try to treat it yourself: take off any jewellery and try to keep the bite area as still as possible to prevent the venom spreading through the body, then go straight to the local hospital. But let’s put it in perspective:

Only 100 people are bitten by snakes in the UK each year and “Deaths from adder bites are rare. There have been 14 reported deaths since records began in 1876, with the last death in 1975.” (Source NHS*)

Yes, that’s right, the last death from an adder bite was over 40 years ago. That’s not to suggest it isn’t nasty and painful, but quick treatment with an antivenom will help alleviate it.

The biggest cause for concern is for those susceptible to anaphylaxis, in which case immediate medical attention must be sought (dial 999).

Prevention is always better than cure and the NHS advise walkers to wear long trousers and boots that cover the ankles – and if you’re lucky enough to see one, don’t try to pick it up!

Can An Adder Kill My Dog?

First off, I’m not a dog owner so I have no direct experience.

Most veterinary websites suggest dogs will make a full recovery from an adder bite if you seek immediate treatment.

The most likely site for a bite is the face or fore-paws. It’s really important to reduce your dog’s movement (by carrying it back to the car for example) to stop the venom from being carried around the body, then head straight to your vets for treatment, which might include an antivenom. There’s lot’s of general information online, but if I had a dog I’d seek advice from my own vet before I went out in the summer months, especially if my dog had any particular health issues.

OMG It’s A Snake, How Exciting!

Next time you see one of our native UK snakes or slow worm you can count yourself one very lucky walker indeed!

How many UK snakes have you seen – did you manage to get a photo?! Let us know how you feel about them below.

Finally, do you take a first aid kit out with you, or an emergency card for your wallet? It’s a really good idea, so follow the links for my guides!

Nature and Wildlife, Tips and Skills

Explore More – Do A Navigation Course On Dartmoor!

The Beginner Hiker’s Guide To Day Hiking And Walking Gear