Why a phone case review? It’s a bit insignificant isn’t it? Well, yes, until your phone’s ruined in a week-long deluge! Which is why I like to review the small things as well as the bigger cost items – because they’re often overlooked but can make a hike far more comfortable and less traumatic (who likes a dead phone?!). So, let’s get on!

With autumn and winter on the horizon and a new phone in my pocket, I needed a waterproof case I could rely on. I’m happy to report the Aquapac TrailProof protective phone case fits the bill, perfectly. Here’s why.

There are several reasons I chose an Aquapac phone case over other brands, but here are the key ones:

In no particular order: 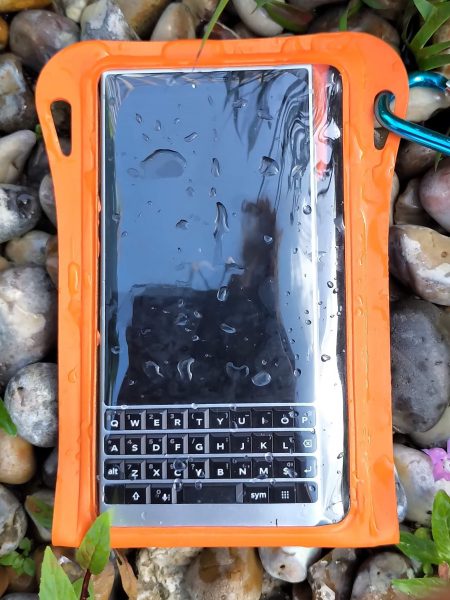 It would be disingenuous if I didn’t acknowledge that the colour had something to do with buying it. Orange, it’s the best colour in the world! (Orange is a new colour for this case in 2019, but it’s also available in black.) And, its got to be said that orange is a particularly useful colour for finding your mislaid phone… Especially when it’s buried under a load of wet clothes in your tent! Or maybe floating off down the river because you dropped it off your SUP…

This is significantly less than other waterproof cases of a similar size, which often retail between £20 and £30. You can’t argue with that. 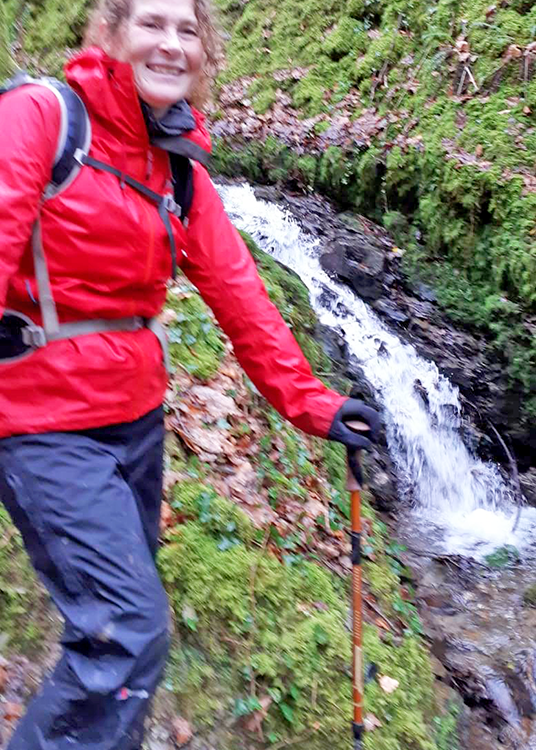 Getting wet in Cornwall – as per!

The TrailProof is designed for hiking and backpacking and it works perfectly on the trail.

I’m not especially interested in the ‘water rating’ (Like most people, I haven’t got time to read what the ratings mean), I just need to know that it will

The answer to all those questions is a resounding yes. And you can even deliberately submerge your phone to take under water photos, although I haven’t experimented with that option!

It’s made of TPU and the seams are welded with high frequency radio waves. It has a very chunky zip-lock seal that’s actually pretty awkward to open, which reassures me it’ll be waterproof! (And, seriously, it’s not that awkward!) There’s also a TPU flap that folds over the zip-lock and then Velcro’s to the back, making it perfectly waterproof.

To ensure waterproofness though you do need make absolutely certain that the seal is clean (from grit, etc) and ‘clicks’ closed.

Aquapac recommend sealing something worthless inside and submerging it in a bowl of water to check for waterproofness before you use it outside for the first time.

This is great tip, because you can make sure it hasn’t been punctured in store and that it’s free from any manufacturing defaults.

How Easy Is To Use The Aquapac TrailProof? 10/10

Very easy! But here’s the breakdown. I have a Blackberry Key 2 (don’t judge me, it’s Android and it does the job!) that fits inside snugly. The Aquapac TrailProof is described as a ‘generic’ fit and the only minor issue I have is that I have to wriggle the phone a bit inside to turn it on (the buttons are on the side). But this is what you really want to know:

It’s faultless, even when it’s covered in rain. But it’s worth noting that you can’t use finger print ID, so you have to enter your code. No issue with that.

I was impressed! Aquapac recommend you keep the clear window pressed against the camera lens for the best pictures, but I didn’t realise that. I snapped away as I usually would and I couldn’t tell the difference between case and no case – and yes, I did have my glasses on! The clear plastic areas are made from a non-yellowing material so you shouldn’t have any problems over time.

This is where the TrailProof exceeded my expectations. I’ve made and taken phone calls and there was no discernible lack of audio quality. I took short videos talking at the camera from a distance away and the recording was as good as it is without the case (I won’t torture you with my efforts!). But one of the things I love is that I can still listen to podcasts! Obviously you can’t use your headphones, but if you’re somewhere that it won’t disturb other people or wildlife, the sound is crystal clear and the volume works as normal.

The TrailProof feels as sturdy as it looks. It’s more rigid than other Aquapac cases (the inside back of the case is flocked), but it’s flexible enough for ease of use and I have no doubt it’ll last years if I look after it well. And, for all the robustness it’s still very lightweight.

The case comes with lashing points and a karabiner to clip it to your rucksack (read my review of my newest backpacking rucksack too), but to be honest I prefer to have mine on a cord. This is because I find it easier to use when it’s hanging around my neck – I haven’t got to fumble about trying to unclip it to use it. And it also means I can tuck it inside my jacket for even more rain protection. Luckily there’s a lashing point on both sides of the case, so it’s easy enough to swap out the karabiner for cord.

Well, you knew that was coming! Honestly, I’d never have thought it possible to write a 1000 word review for a waterproof phone case. I mean, what is there to say – it either works or it doesn’t! This one works, and then some. Aaaand…

PS If you’re interested in any of the other qualities of the TrailProof check out the Aquapac Website for details, like how to take the best underwater photos as well as all the technical information. Alternatively, head on over to Amazon UK to get yours – don’t forget it’s also available in black!  Find it on the  Aquapac website

If you’ve found this review useful please share the love on Pinterest and help others find it too!  Thanks my lovely xx