Posted at 14:09h in Cornwall, Walking and Hiking by Stephie 0 Comments

The Mineral Tramways Trail From Devoran To Portreath

Truro is in the heart of Cornwall and not far outside of it there’s a coast to coast trail that I know pretty well. The trail winds its way through Cornwall’s industrial heartland along the route of the old ‘mineral tramways’. These tramways transported ore to the ports of Devoran near Truro, and Portreath on the north coast, which makes it a fascinating journey through time. The main track is about 11 or 12 miles or so, but there are plenty of side tracks, mine workings and woodlands too. It’s an intriguing place to explore, whether you walk the whole route or a small part of it. 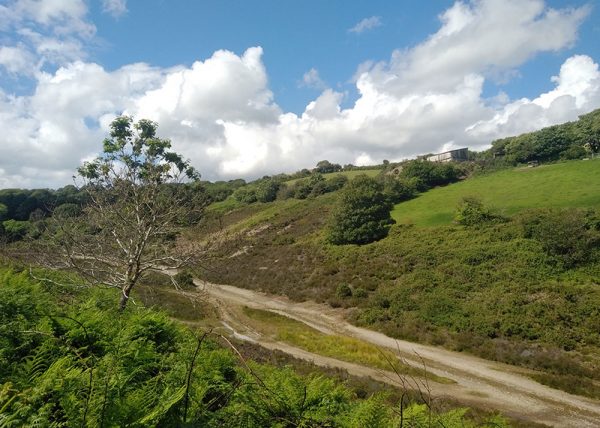 I’d been cooped up for a couple of weeks with flu and I was desperate to get outside, but I didn’t have much energy. The Mineral Tramways Trail was the perfect solution. It’s close to Truro (home) and easy to get to by bus (I usually walk from Truro, but not that day!) and it’s pretty flat and off road most of the way.

I rocked up in Devoran around 2.30 on a beautiful sunny afternoon, which instantly lifted my mood. The first half of the trail is so familiar that it’s easy to walk through and not notice any changes. But on a sunny day like this everything seems different and the changes in season come to life.

The first big engineering structure you can’t help notice is the Carnon Viaduct (below), but I was more interested in the heathland underneath it. And to my untrained eye it looked like it was flourishing. 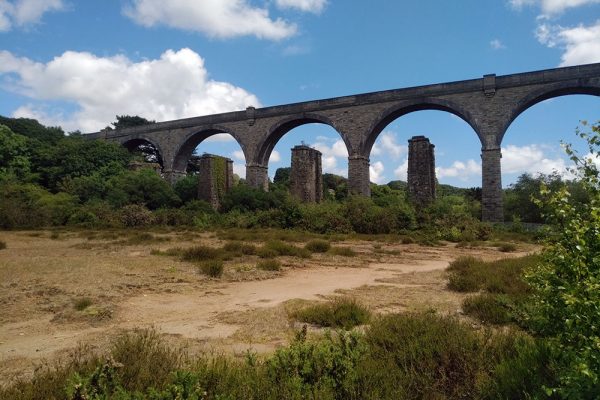 Carnon Viaduct. The viaduct you see today was built in the 1930’s, but the piers that are still there are from the original built by Isambard Kingdom Brunel, which opened in 1863. The original viaduct had a wooden ‘deck’ and I like to imagine the sound of steam engines rumbling across it!

I volunteer with Cornwall Wildlife Trust who have a small nature reserve on the trail (not far ahead of the viaduct) and I was keen to see how it was doing. We sometimes help to manage the scrub on the Reserve for the benefit of the surrounding heath, so it’s always good to see if your hard work is paying off!

I love this tiny reserve where ponds and marshy ground attract a wide variety of plants and wildlife, including rare damselflies. Another thing I love about it are the surrounding trees because there aren’t that many on old mine sites. But it’s not just the alders and willows that keep me coming back, the wildflowers are stunning. At this time of year blue blobs of scabious look like paint dripped through drifts of white oxe-eye daisies, and the butterflies seem to love it as much as me.

I went for an amble round, following narrow earth paths between hedgerows overhanging with pendulous grasses and nettles. Hoverflies and bees were humming, birds singing and butterflies feeding, and the heady scent of woodbine filled the air. And I felt like a small child lost in a world of my own on a hot summer’s day as I pushed through. It was idyllic and if you’re in the Truro area Bissoe Valley Nature Reserve is worth seeking out. (Click the images above to see them at a larger scale.)

From the Reserve you head on past the old chimney of an arsenic works and on to Bissoe Cycle Hire and Cafe. The cafe is usually busy, but the smell of coffee is like a drug that I can’t resist and I convinced myself (a bit too easily) that I needed to take it easy after the flu, and in I went. I spent some time people watching in the sunshine (watching people clad in lycra!) before before making my way to a favourite place, which is off the main track.

The Adit – A Well Kept Secret

The rampant undergrowth hides an intriguing secret, but if you know where to look you can find the entrance to an old mine, which heads down a long, narrow adit. At the end of it is a deep, bottomless shaft (it’s a dangerous place), but some years ago I was lucky enough to be shown along it by members of a mine rescue team. The history and construction of the adit fascinates me and I can never resist a poke around at the entrance.

A passage through time

It’s strangely beautiful as it leads along into the pitch blackness of the hillside. I love the way the stonework forms a low, arched roof all the way along the tunnel as well as the little niches in the walls that held candles to light the way, where black soot still stains the stone. Construction of many of the adits in the area began in the mid 18th century, but this mine dates back to the bronze age. The tangible sense of people sloshing their way into a subterranean world of heat and risk hangs poignantly in the air. Imagine what it was like to come out again, that small shaft of sunlight just ahead.

The mining industry has severely scarred the landscape so you don’t need to go underground to experience it. Nangiles tip rises like an ochre coloured hill on the side of the valley. The old buildings of Poldice Mine, which include the foundations of the fabulously named stamps and buddles that were used to crush and sort the ore, are easy and safe to explore. There are tailings at Wheal Maid, which are aptly named Mars by MTB-ers because of it’s barrenness and red coloured earth. But once you pass through this other-worldly place you feel like you’ve entered a whole new landscape. The scars are still there like open wounds, but rough and ready cottages, small-holdings and paddocks begin to edge the track.

Farm track on the trail

As you get closer to the north coast the walk begins to feel more like heading into the countryside, although you don’t cross any farmland. The hedgerows were stunning, full of colour and scent. I stopped to listen to thrushes singing at the tops of hawthorn trees, heard robins calling and saw wrens flitting about. The scrubby fields either side of the track were being grazed by ponies and, randomly, even a bunch of shorn alpaca.

This mid section of the trail is fairly quiet and I barely saw anyone, which always feels good to me, but there is a section where you have to walk beside a main road for a while. I hate it and can’t wait to get onto the track above, where the coverage of trees all but blocks it out. And then, when I’m finally on that track I know it’s not far to Portreath. 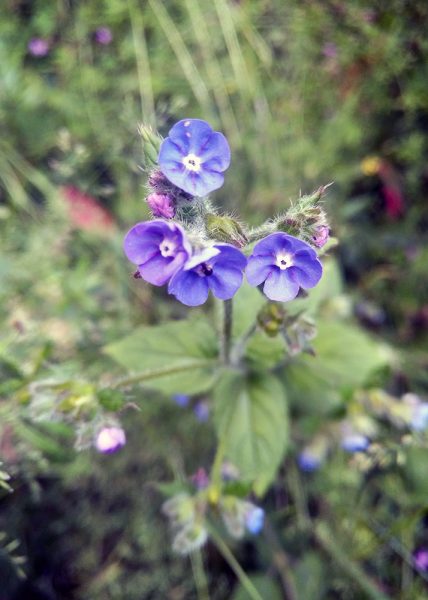 I felt broken by the time I got to the beach. Exhausted, coughing, sneezing, hungry and thirsty. But despite all that I was feeling good – getting outside is always the right medicine. I was ready to go home.

Getting Back To Truro (Why Isn’t Life Easy?!)

I planned to get the train back to Truro from Redruth, but I missed the Portreath to Redruth bus and had an hour to kill in Portreath, which meant time for chips on the beach! The beach was quiet for a change and out of the wind it felt like a hot summer’s evening; the perfect place to relax. 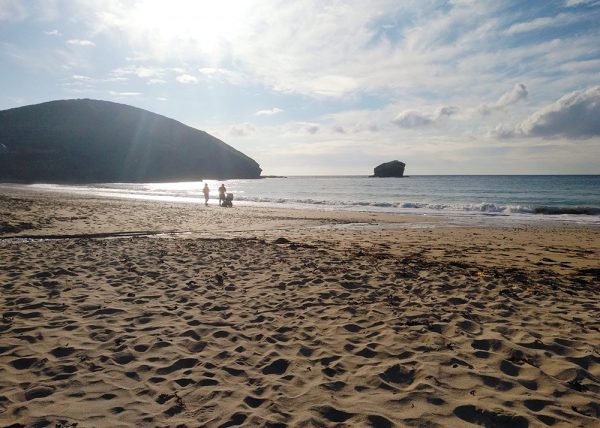 Chips on the beach

I wasn’t relaxed for long though; I discovered there was a three hour wait for the train to Truro because I’d missed the last connection. Not happy, but luckily there was a bus. Unluckily I get travel sick, which is why I don’t like buses. Luckily I’d eaten chips, so I didn’t get sick haha!

By the time I got home I was utterly exhausted and ready for bed, dreaming about my next coast to coast hike: The Saints Way from Padstow to Fowey, which I’ll tell you about soon (it’s another trail I highly recommend and hope to inspire you to try).

If you’re in the Truro area why not give this trail a go (I’ll post all the details you need in the next day or two), or let us know about a coast to coast you’d recommend in the comments below!