01 Apr The Principles Of Leave No Trace

Posted at 07:00h in Backpacking and Camping, The Great Outdoors, Walking and Hiking by Stephie 0 Comments 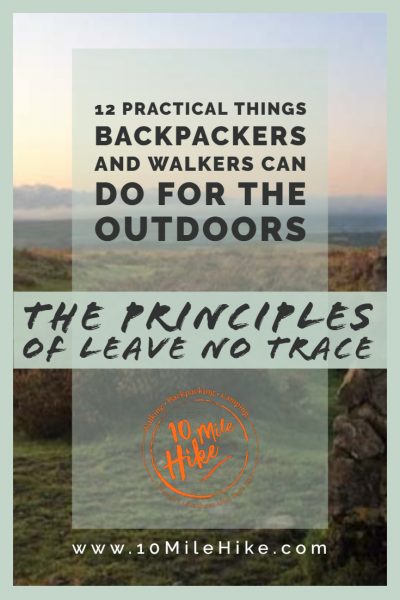 What Are The Principles of Leave No Trace?

The principles of Leave No Trace form a straightforward guide for individuals and outdoor organisations to care for the natural environment.

And here they are:

The Seven Principles Of Leave No Trace

© 1999 by the Leave No Trace Center for Outdoor Ethics: www.LNT.org.

These seven principles were formed by a US organisation called Leave No Trace (with capital letters), which has its roots in conserving national parks in the USA. They do this through education for the benefit of wildlife and habitats, as well as future visitors to the parks.

What Relevance Does a US Organisation Have In The UK?

The Seven Principles of Leave No Trace are gaining currency amongst UK hikers and wild campers because they’re easy to apply to any environment. But what’s wrong with our own Countryside Code?

What Exactly Is The Countryside Code? 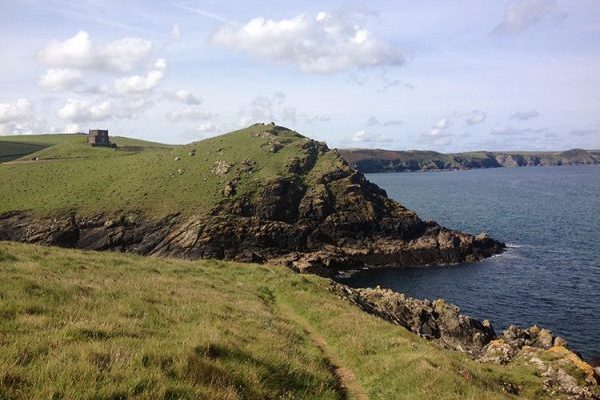 The Countryside Code is familiar to most walkers in England and Wales, and the Countryside Code for Northern Ireland is similar. They’re simple guides to walking in the UK, which cover Public Rights of Way and Open Access land (commons, moors and mountains).

The original Country Code was drawn up in the 1930's and has been through a number of iterations since then. The current format was drafted in 2004 and renamed The Countryside Code. Most of the core principles are still familiar.

How Are The Principles Of Leave No Trace Any Different?

‘Leave no trace’ is an easy phrase to remember, but what the Countryside Code lacks (and Leave No Trace appears to offer) is specific guidance. This is especially true for wild-campers. The Scottish Outdoor Access Code is much more comprehensive, as you’d expect given the extent of the rights to roam there (set out in The Land Reform Act, 2003).

Individual National Park websites or local authority by-laws can be helpful for particular areas, but what they all appear to lack is how to leave no trace. And this leaves them open to interpretation. For example this quote is from The Countryside Code:

And this one is From Dartmoor National Park Authority:

Ensure you do not pollute streams or rivers. 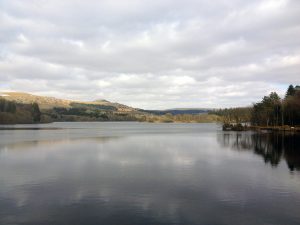 But what does “be careful” actually mean? Even the word “pollute” can be misconstrued or seem irrelevant in the context of hiking and walking. Hands up who immediately thinks of agricultural chemicals polluting rivers, or waterways poisoned by the effluence of abandoned mines? I know I do. But it’s possible to pollute streams or rivers on a small, individual basis too. Emptying our detergent filled washing up water into a stream, or washing our hair in a lake using shampoo is pollution.

The consequences might seem negligible, but that’s not the point:

More and more of us are venturing outside for recreation and every individual act of pollution has the potential to harm wildlife and habitats.

The cumulation of this sort of pollution really does have the potential to destroy the environment we love. This is especially true in well-loved areas, on popular routes in mountains, coastal paths and local beauty spots. But of course it’s not just chemical pollution that changes the environment. There’s litter, noise, erosion, fire, removing ‘souvenirs’, even doing something that impacts on other hikers or people that live in the area.

Personal responsibility is at the root of the ‘leave no trace’ movement, and we should inform ourselves and help and encourage others to do the same.

So let’s get down to some specifics, here are

Where are you going? How long for? Make a note of what facilities are on your route: Do you know where the water sources are? Are there obvious trails and footpaths? Ask yourself what else you might have an impact on.

Think about where you’re going to camp and ask yourself how discreet is it and whether you’re likely to damage the ground. How will you clean your pots without detergent; how will you wash yourself? What impact will you have on other visitors? (Excess noise can have a serious impact on other people’s enjoyment, for example).

Whether you’re out for a day walk or a multi-day hike. Why? The chances that you’re not one of the millions of us that have been ‘caught out and desperate’ miles away from the nearest public loo are pretty slim! Plastic trowels weigh next to nothing and cost pennies. What have you got to lose?

When you need to go make sure you’re 30m (about 40 steps/20 paces) away from any water sources. Dig a hole about 6” deep, use it, then cover it with the soil which will help it degrade. Toilet paper, wipes and sanitary products need to be ‘packed out’ (put in a bag and disposed of at home). This ensures animals won’t be attracted to it and dig it up.

Walk through muddy sections of path, not around them. All you do by trying to avoid the mud is erode the path, make it wider and make more mud in the process!  A walking pole (or a stick) is a useful way to assess how deep the mud is and where the ground is firmest.

5. Take all your rubbish home, including food waste

A banana skin takes a staggering 2 years to decompose and they’re an eyesore on mountainsides and hedgerows everywhere. Even the humble apple core takes 2 months to biodegrade. Take home any food scrapings, teabags etc from your overnight trips too (even tea bags contain plastic). Don’t bury them as this can attract animals. Before you leave your picnic spot or camp site remember to have a good look round and make sure you haven’t dropped anything. Pay particular attention to small things that are easy to miss.

Pick up any litter you see on the trail. It’s really easy to do on your way back down the hill, or when you’re nearing the end of your route. Think of it as doing something kind for the hill that’s just given you an epic weekend! Why not get epic yourself and take part in the Real 3 Peaks Challenge. 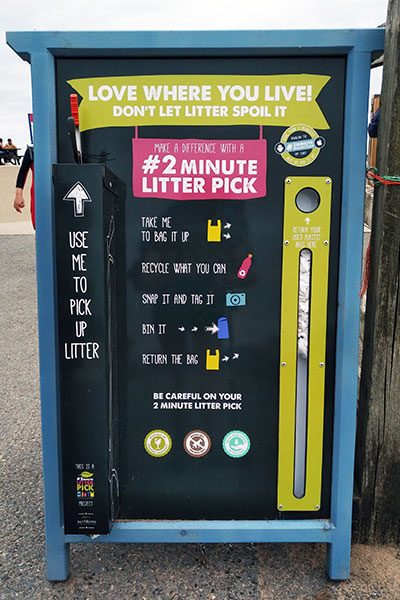 Look for these boards near the beach

The amount of plastic and rubbish that tourists leave behind or gets washed up in winter storms is appalling. If you don’t live near a beach you probably wouldn’t believe your eyes. Photos of dying or dead creatures that have ingested or got trapped in plastic are heart-wrenching. Seeing it for yourself is sickening. Whenever you’re at the beach, please, do a #2minutebeachclean.

If there’s a path nearby stay on it. Short cuts can cause erosion and damage to habitat, for example ground nesting birds or rare plants.

Don’t light fires unless it’s specifically permitted by the landowner (it’s often illegal). If you do light one, keep it small and research ways to do it that won’t scar the ground. (As an example you can cut out a section of turf with your trowel, light your fire and replace the turf once it’s gone out.) 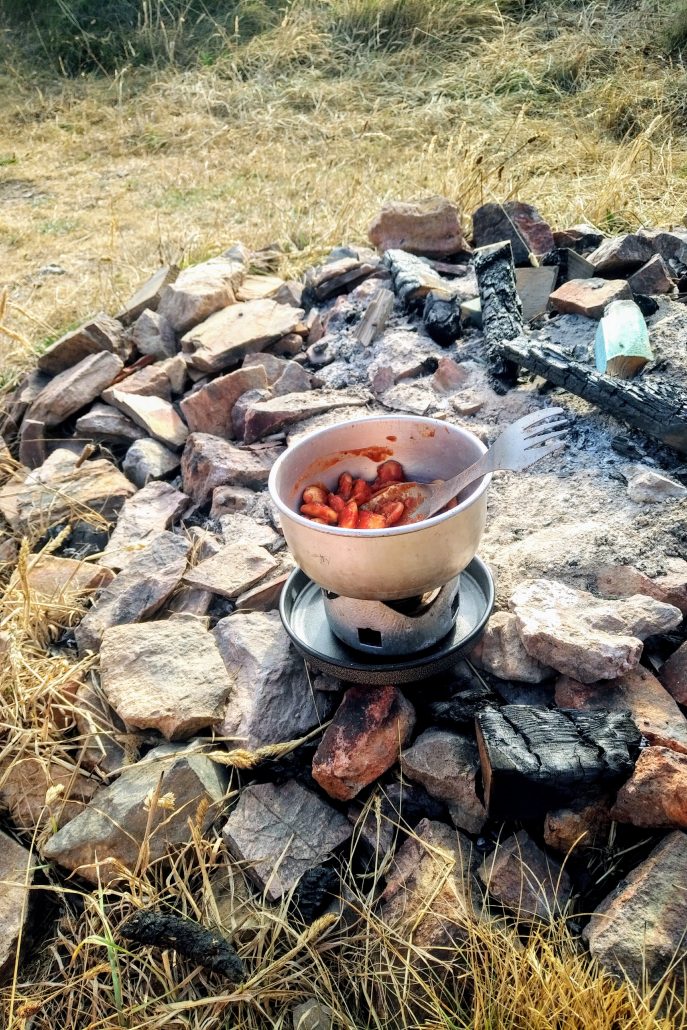 The unsightly remains of a campfire left on the South West Coast . This pile of rock and ash has grown larger and larger over time and batteries and metal have been found on top of it.

If you light a fire on a beach don’t leave half-burnt logs lying around, or bury them under sand. The same goes for your portable bbq too – treading on hot, buried coals can cause serious burns. Douse any fire remains in water until they’re cold and take them away with you.

10. Leave Habitat As You Find It

Plants are beautiful to look at and as tempting as it is to pick flowers they provide essential food and shelter for insects and mammals. Digging them up is an offence under the Wildlife and Countryside Act. Try not to move fallen logs or rocks as this disturbs, and even potentially kills, ecosystems. It’s equally as important to leave species where you find them. Moving a species from one area to another can upset the ecological balance completely, often detrimentally (eg invasive non-native species).

There are other people on the trail, picnicking in the woods, relaxing on a quiet beach, enjoying the sounds of nature…then you turn up the music and drown it all out. Would you like it? No, of course not.

This is a pet hate amongst so many outdoors people. Not only do drones invade other people’s privacy and pose a danger from collision, the incessant whining noise is intrusive and can destroy the atmosphere of a place in seconds. Be aware of the law and local by-laws (they’re banned on parts of Dartmoor for example) and always use the Civil Aviation Authority’s Drone Code.

What Would You Add?

That’s 12 ideas from me, (and if you’re planning a wild camp, you’ll find some more over here) but if you have any thoughts, comments, personal stories or ideas on the subject start a conversation below – it’s a subject we should all be passionate about!