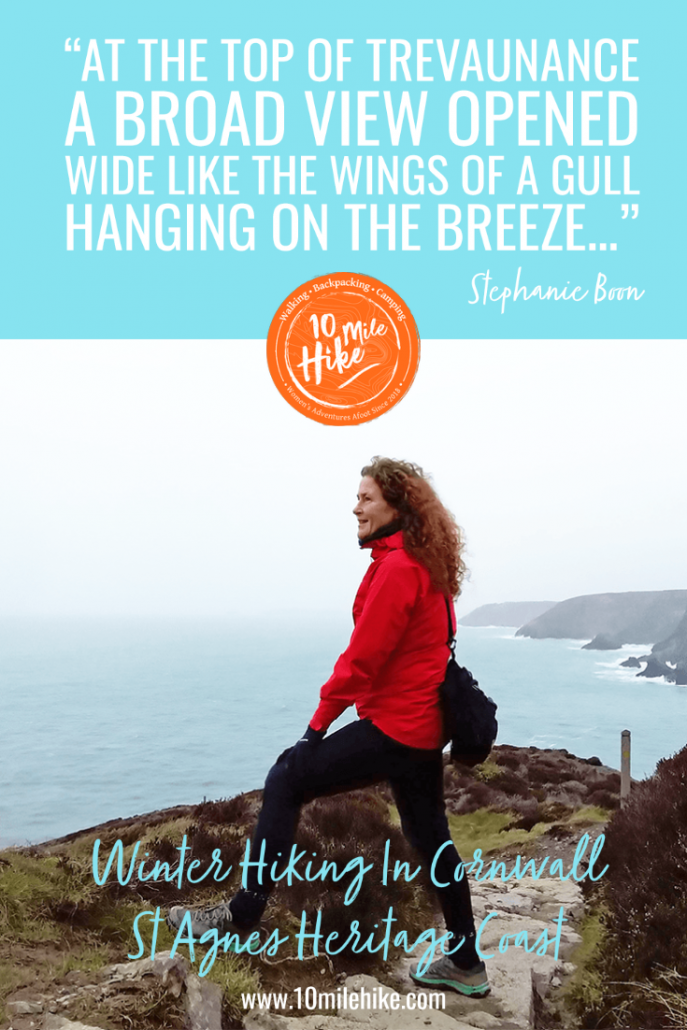 A section-hike on the Cornwall section of the South West Coast Path can knock you down as easily as it lifts you up, but,

I wasn’t prepared for the knock-down I got on this short cliff walk between two sandy coves on the St Agnes Heritage Coast: Trevaunance Cove and Chapel Porth – very familiar stomping ground. 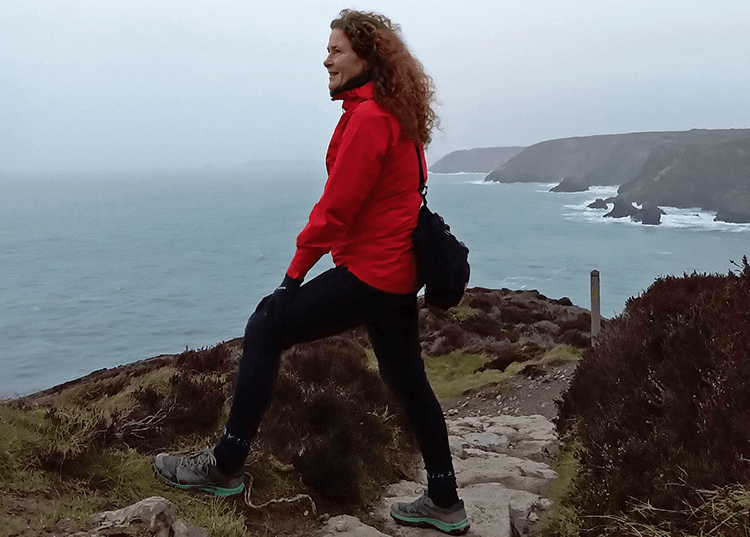 Winter shouldn’t stop a hike on the South West Coast Path…but a virus just might!

This was the 2nd continuous section-hike of The Cornwall Coast Path on the St Agnes Heritage Coast that Katie (my hiking partner in crime) and I tackled, picking up where we’d left off the week before (we’d settled on walking just one section a week to begin with because of other commitments and time constraints).

Our first hike might have been a baptism of winter-hiking fire, but this walk was marred by another familiar winter complaint…

Trevaunance Cove is an easy walk from St Agnes village down to the St Agnes Heritage Coast, but don’t be fooled: there’s an energy-sapping climb up to the coast path that turns most people purple and gasping for breath. I’m usually the impatient one at the back of a queue of people, getting irritated because I can’t get past (it’s a narrow path) but this day was different: I had to stop with each twist in direction – my legs were heavy and my lungs just wouldn’t fill up. We’d walked barely a mile and I was exhausted because a shitty virus is guaranteed to bring you down. 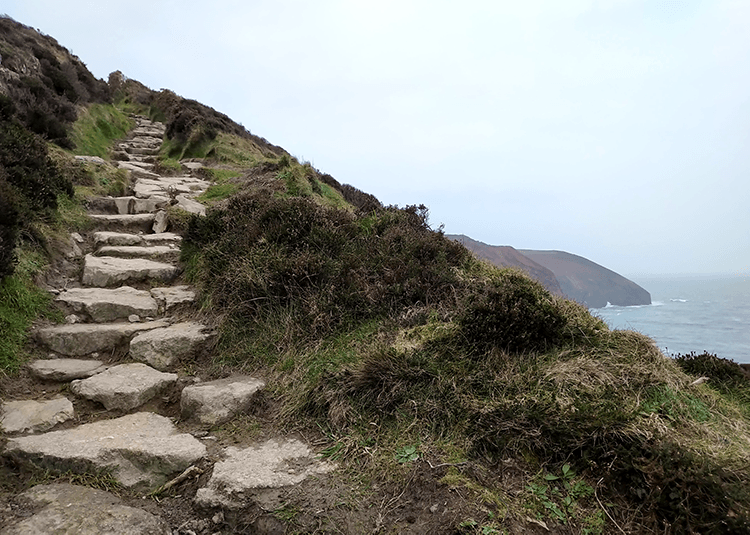 Steps out of Trevaunance Cove on a winter’s day

I hate letting people down and my grim determination to walk even a few miles was against my better judgement: I should have stayed in bed.

Our original plan of a 9-mile walk to Portreath would have to wait, so we devised an easier 6-mile circular route from St Agnes instead. There were 3 measly miles of coast path on this walk (and a mere 1.5 on the next section to Porthtowan!) and my boots were filled with lead and disappointment, but for the first time in days, we had a big blue sky and no gales. It was one of those crisp, clear winter mornings that are as precious as a balmy summer’s day: perfect walking weather.

At the top of Trevaunance a broad view opened wide like the wings of a gull hanging on the breeze and the 9-mile section we hiked from Holywell Bay the previous week stretched way back to the horizon. I was filled with awe. 9 miles is just 9 miles, but when you’ve walked as far as you can see you become acutely aware of looking at a journey, not just the landscape, impressive as it was. But this privileged backward look would soon be gone: storm clouds were gathering. 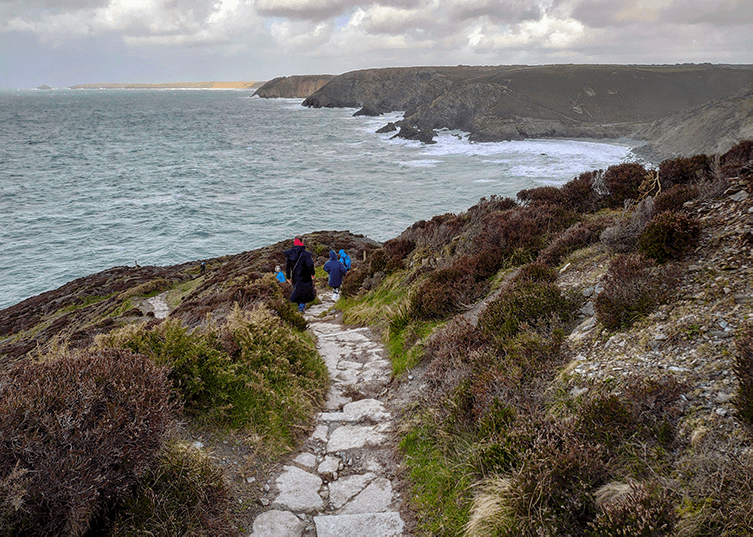 Looking back towards Holywell Bay from the path down to the steps at Trevaunance, St Agnes

I don’t remember much of the walk along the cliff as I followed Katie and her dogs; a mind befuddled with a virus and over-familiarity easily switches off, but the sea looked churned and thick, like one of my failed attempts at making soup, smeared with large dark grey streaks. They could have been seaweed or rocks, or the shadows of brewing clouds. We didn’t know.

As the path swung round onto Newdowns Head, exposed and wild, our chat abruptly stopped – my legs crumpled beneath me and I fell into pillows of heather and bracken, swept off my feet by the wind, an enemy ambush hiding low in wait for us.

Horizontal rain lashed our faces and we were utterly bewildered; where had this bitter onslaught come from?

It disappeared behind us as quickly as it came, but the skies ahead were getting decidedly more ominous. 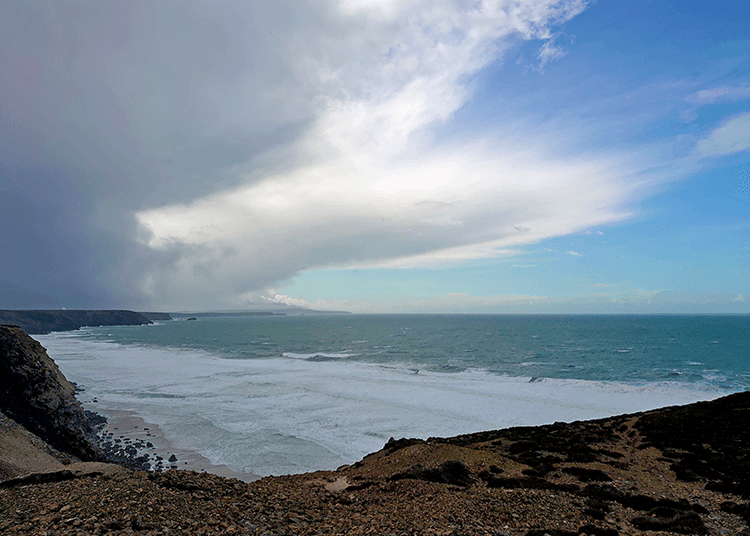 This 11-mile coast-to-coast walk through Cornwall’s mining landscape: Coast to Coast In A Day From Truro to Portreath

A circular walk from Redruth: Carn Brea: A Walk In Cornwall’s Industrial Heartland

A 15-mile walk along the South West Coast Path from Newquay to Chapel Porth: Newquay to Perranporth and On To St Agnes – A Stunning Coastal Hike 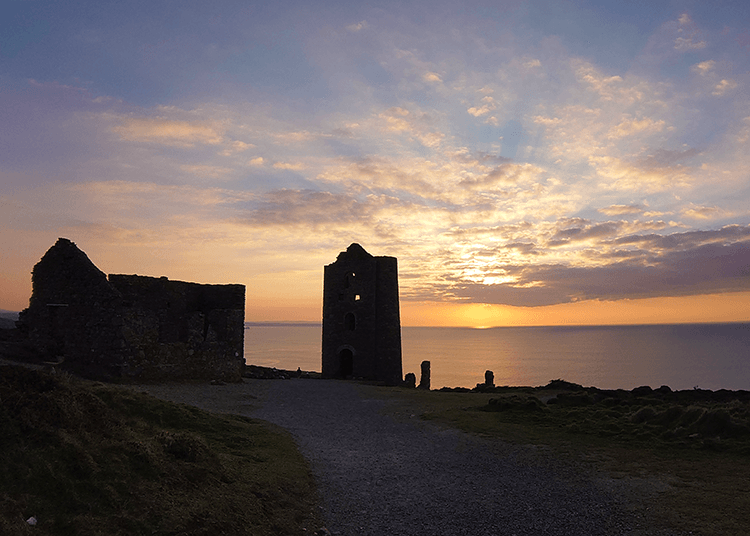 Wheal Coates mine just above the coast path

The path widens as it approaches Towanroath Engine House, undoubtedly Cornwall’s most iconic mining edifice. Perched close to the edge of the cliff, defying its vulnerable position for more than a century, the distinctive chimney stack and gaping windows feature in just about every calendar and guide to Cornwall there is. The engine house is part of the Wheal Coates mining complex (above), which is cared for by The National Trust and part of the Cornish Mining World Heritage Site. Drop a few stones down the shaft (covered with a grill) beside the engine house to get a sense of how deep Towanroath Shaft is – 600′ is a long way! It’s worth a climb up the cliffs to see the rest of the buildings too, which all date from the 1870s. 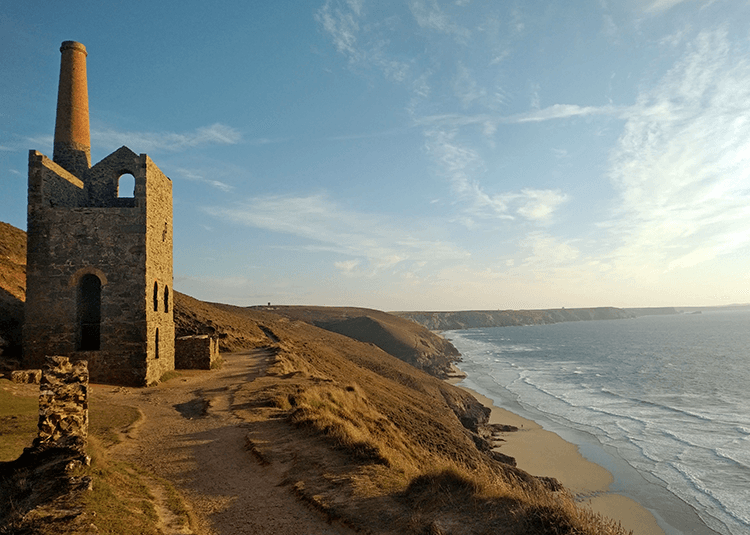 The mine worked a seam of tin that runs out under the sea and early records show a mine on the site from 1692, but the fortunes of Wheal Coates waxed and waned with the price of tin, as well as the problems of flooding and getting the ore to the surface. 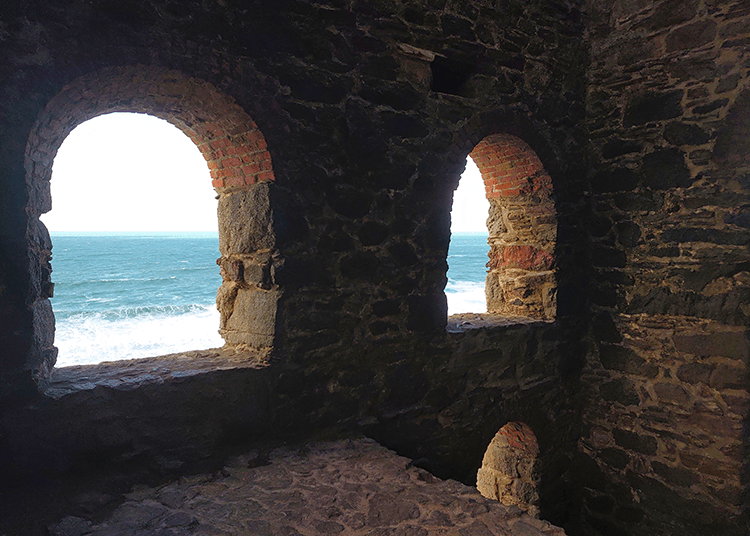 The view from inside Towanroath engine house

138 people were employed during its most prosperous period, but the romance of the setting belies what it really was: an imposing, noisy, industrial site with bleak and dangerous working conditions, which are brought home when you stand there in freezing gale-force winds and driving rain…

Just along the track and down the cliffs is the beach at Chapel Porth. At low tide, there’s a grand sweep of golden sand and in the summer it seems to stretch to the horizon under an endless sky, revealing caves and rock-pools to explore along the bottom of the red-stained cliffs. 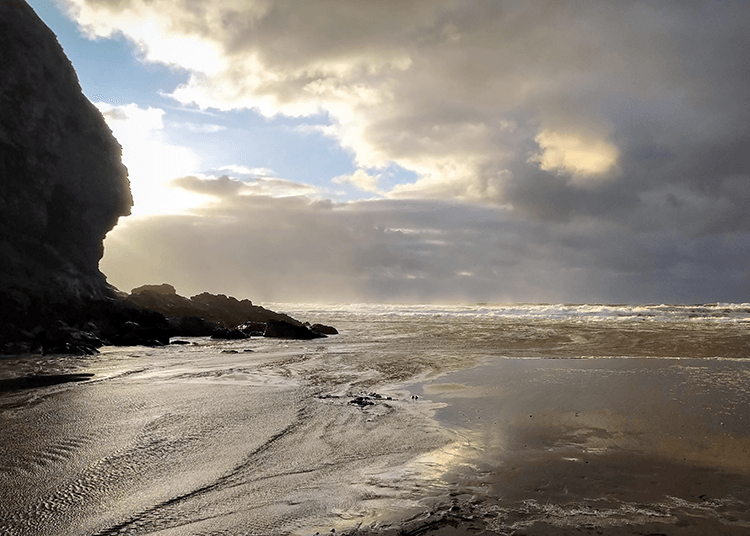 Golden reflections on the beach in winter 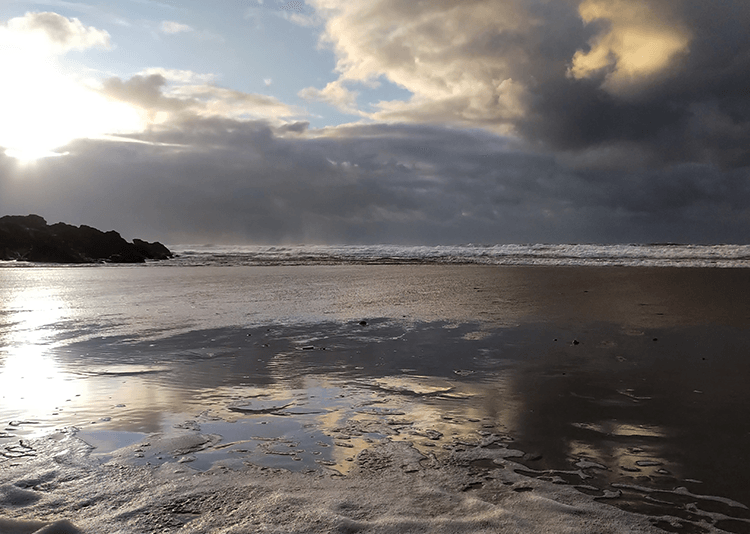 At high tide in winter, it’s a different story.

The beach disappears under threatening waves that crash in with the full brunt of Atlantic storms and as we walked down that day l prattled on about a dead whale that was washed up a few years before.

I’d photographed it a number of times and was unashamedly struck by the surreal sight of blubber dripping off the skeleton. I described to Katie how enormous it was (it took up the full width of the beach), so big that it was eventually transported away for incineration on the back of a low loader, loaded onto it with cranes.

Luckily for Katie the beach cafe was in view and my addled head quickly turned to thoughts of hot chocolate and the temptation of ginger cake. We shared a slice, which the vendor cut into three even though he could see there were only two of us. Weird, we thought.

The cafe was bustling with walkers and the stone shelter was full, so we sat at a picnic table around the back and got stuck in. A strong gust of wind whipped up and lifted the paper plate clear out of view, along with the 3rd slice of cake. Winnie, Katie’s ever hopeful Labrador, lumbered towards it with enthusiasm but returned with that disappointed dog look when he couldn’t find it. A slice for Katie, one for me, and one for the wind.

We hiked back up to the village along the valley at Chapel Combe, up along stony paths rutted and gullied with torrential rain. Then we passed another derelict engine house (part of Wheal Charlotte) that was surrounded by thickets of brambles and into woodland. There were a couple of old cottages along the track and a bog garden that looked like it was inhabited by aliens: the black decomposing leaves of Gunnera, otherwise known as ‘giant rhubarb’. The dogs bounded into the bog and a group of teenagers who’d been ambling towards us stopped to watch them. One of them laughed:

“Imagine if they really were aliens!” 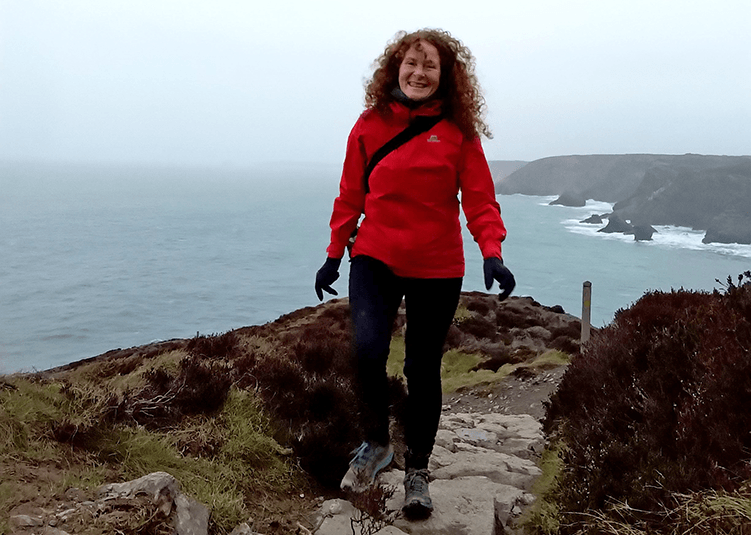 All smiles on the cliffs

They’d be gone in a few seconds I reckon! We grinned all the way back and when I finally got home I collapsed in an exhausted heap like I’d walked a full 26 miles, not a mere 6. Even so, a few miles on the South West Coast Path are always better than none!

If you fancy a short walk on this section of coast you can find a link to my waymarked GPX file below. But if that’s not long enough here’s another great walk through Cornwall’s mining heritage that you might enjoy: 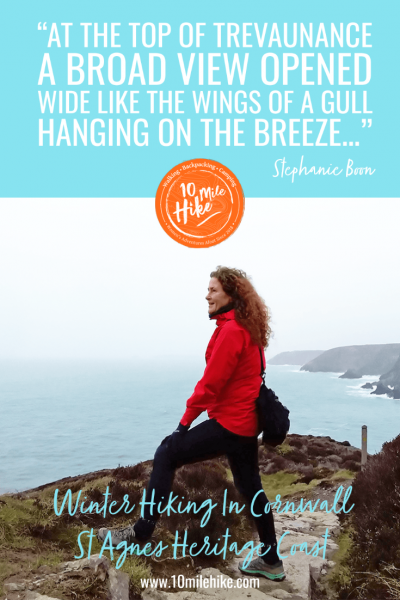 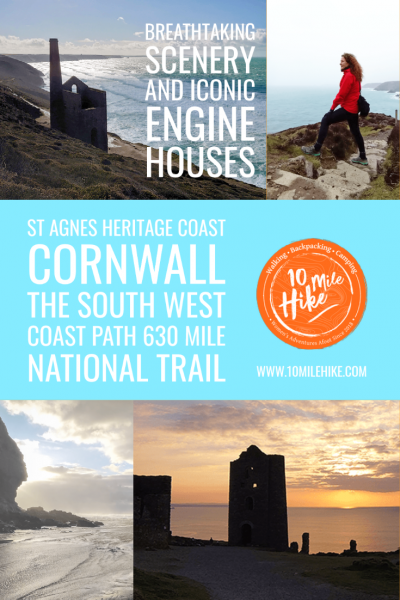 Thanks for reading my lovely. If you’ve enjoyed it I’d love you to share it on your favourite Pinterest board or with your friends – it’s a really easy way to bring people here and inspire them to get hiking in the UK!