630 miles though – that’s a planning nightmare! It’s overwhelming. There’s an easy way to plan your South West Coast Path hike though, and that’s to break it down into much smaller chunks, which is where this guide comes in.

It’s much easier to organise your South West Coast Path itinerary in 100-mile sections, whether you’re thru-hiking or walking the trail in stages.

Most section-hikers can comfortably walk around 100 miles a week, and if you’re thru-hiking the whole trail you’ll find shorter sections less overwhelming to plan.

It’s a difficult task to put all that amazing hiking into one guide, so here at 10 Mile Hike, you’ll find 2! This one gives you 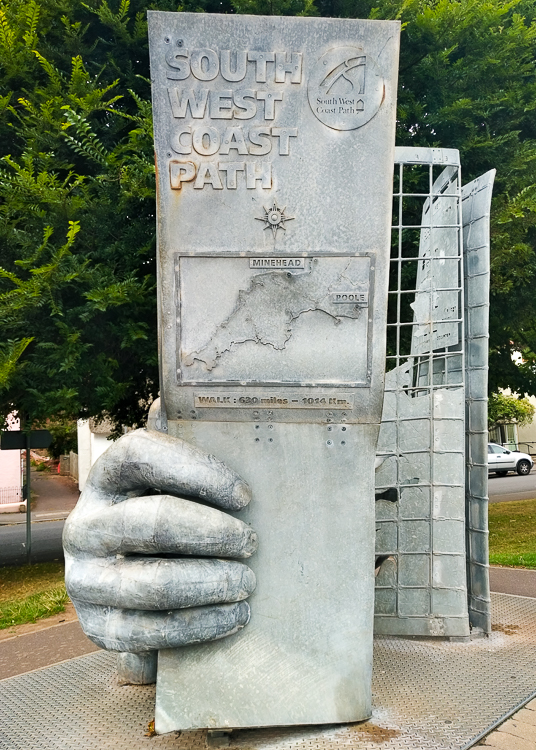 The other guide is Your ultimate Guide To Hiking The South West Coast Path. The Ultimate GuideTo Hiking The South West Coast Path gives you the big picture – all the general planning details you need. It includes things like wild camping, best times to go, gear, navigation, and so on. Head over there if that’s what you need right now. Otherwise, dive into planning your hike in 100-mile sections! 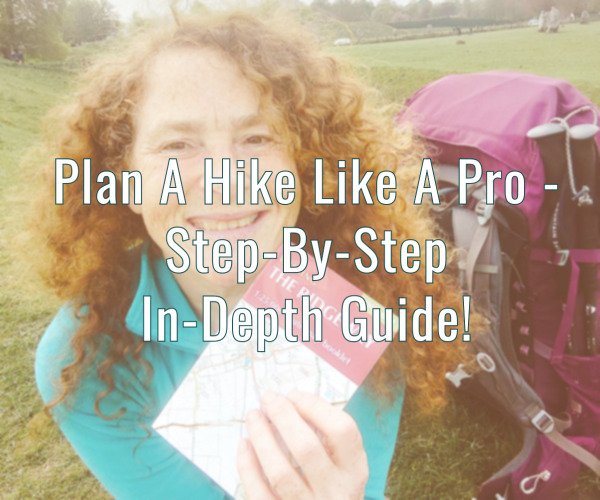 This article explains how to plan any hike and includes budgeting, gear, choosing the right trail for you – and so much more!

The trail begins in Minehead in Somerset on the north coast and finishes on the south coast at South Haven Point (Poole Harbour) in Dorset. Each 100-mile section (ish) is laid out consecutively: 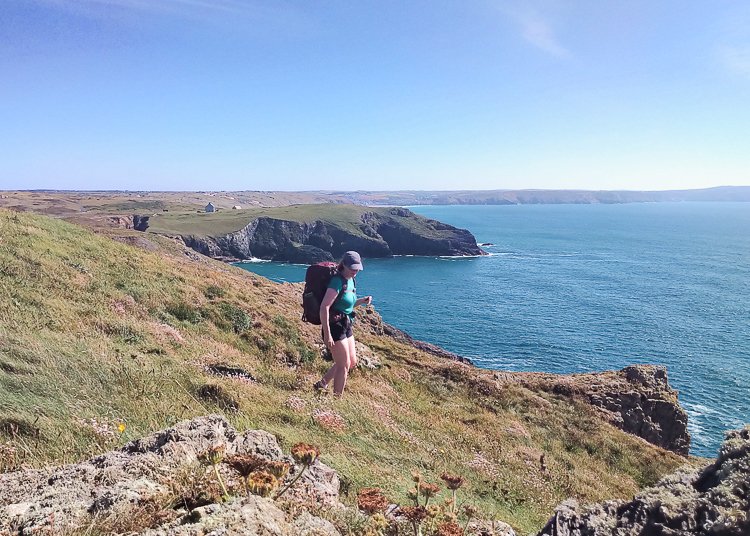 Hiking on the north Cornwall coast

Notes On Travel And Resupply Details

The travel details I’ve given for each section include the most direct bus and train routes to and from a main line railway station.

Main line rail routes provide connections to towns and cities all around the country. The route that serves areas closest to the South West Coast Path is operated by Great Western Railway between London Paddington and Penzance (Cornwall).

Other useful train operators for smaller sections of the trail include Cross Country (with links via Birmingham) and South Western Railway (serving Weymouth, Poole, and London Waterloo.)

The best way to work out a route is to use this map:

I’ve included links to the closest stations in each section, with maps that show local bus stops too.

Find the best price rail tickets with this guide: How To Plan A Backpacking Trip On A National Trail: Travel

You’ll find links to the relevant bus operators below, as well as the route number to search for in their timetables.

There are lots of ferry crossings on this national trail and most of them are seasonal. This means that some sections are only feasible to hike between April (usually Eastertime) and October- be sure to check the timetables linked below.

I’ve listed the main towns and villages along the route that have convenience stores and/or large supermarkets, cafes/pubs that should have charging points and most other services you’ll need – open all year.

There may well be small hamlets and villages that I haven’t mentioned that also have cafes, pubs, public toilets etc, but these could be seasonal.

Highlights include Croyde, Clovelly, the Exmoor Coast including Valley of Rocks and Lynton and Lynmouth, Great Hangman (the highest cliffs on the whole trail), and the fantastic Blackchurch Rock.

You can expect steep climbs, uneven flights of endless steps, remoteness and spectacular views that make the effort worthwhile! 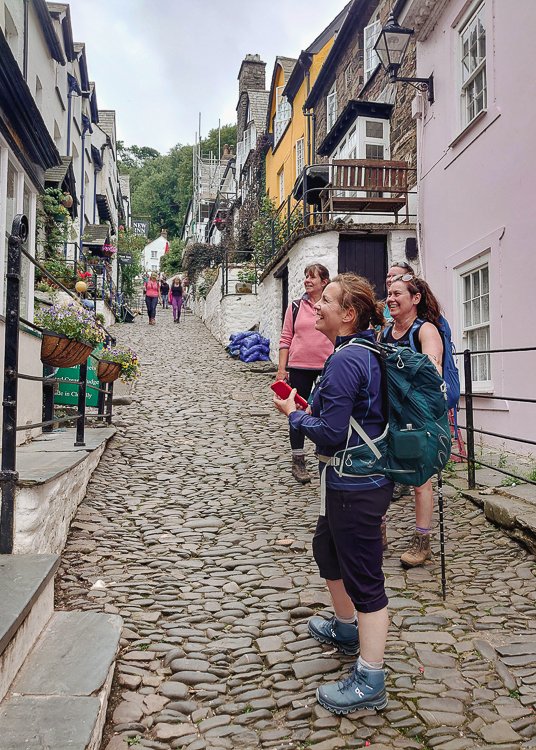 The steep cobbled street of Clovelly. Enjoy a pint at the Red Lion before trudging your way back up again! 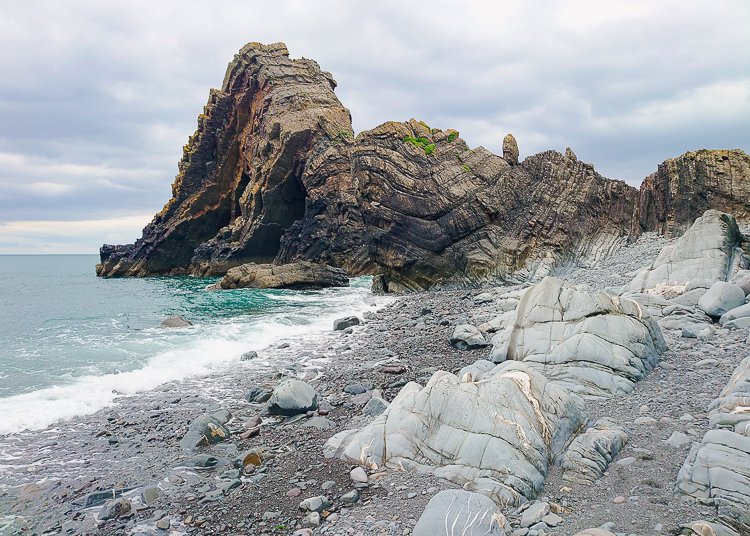 Blcakchurch Rock is between Minehead and Hartland Point in North Devon – and not to be missed! (It’s near Clovelly at SS 29891 26642) 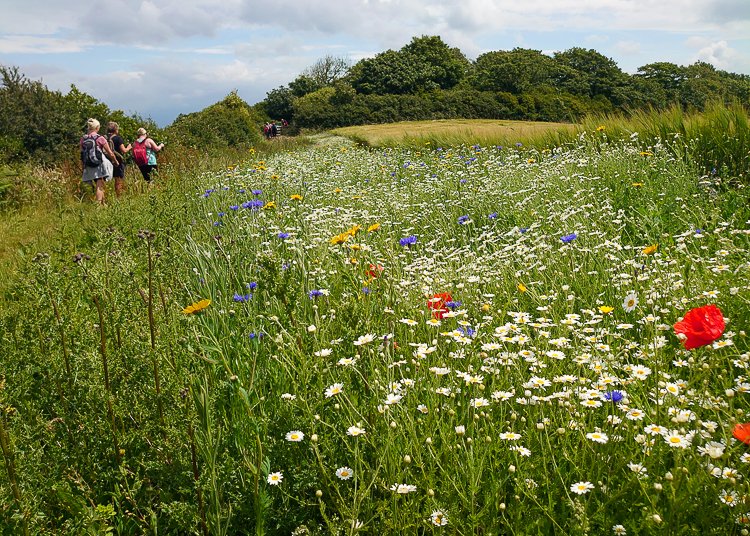 There are no YHAs on the coast path in this section 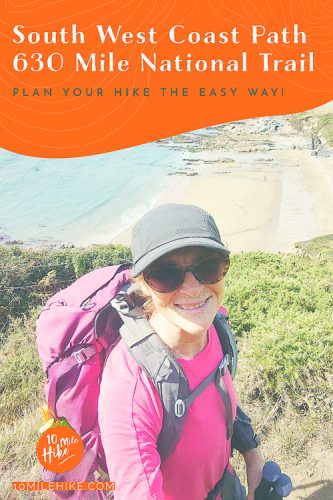 Pin me and save me for later!

Highlights include the geology at Millook, plus Boscastle, Tintagel, Port Isaac, Padstow, Newquay (the beaches, not the town!) and Holywell Bay.

More steep climbs and uneven steps mark this section of the South West Coast Path, but the scenery is outstanding 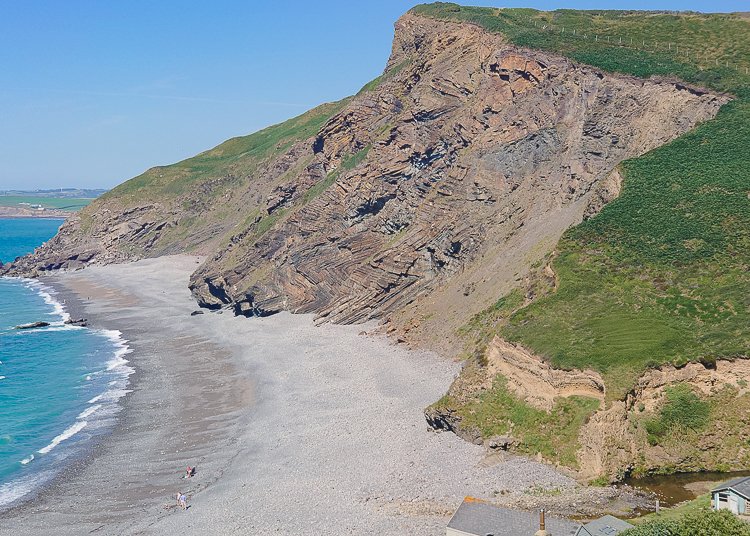 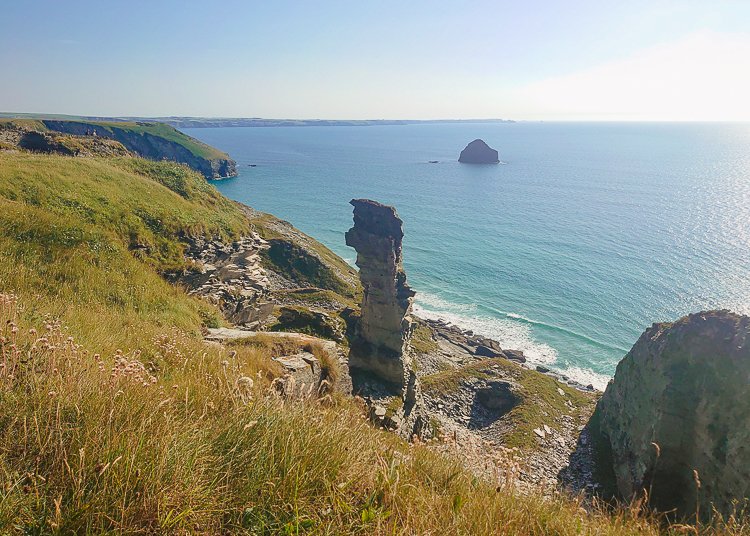 Enjoy the climbs to Boscastle! 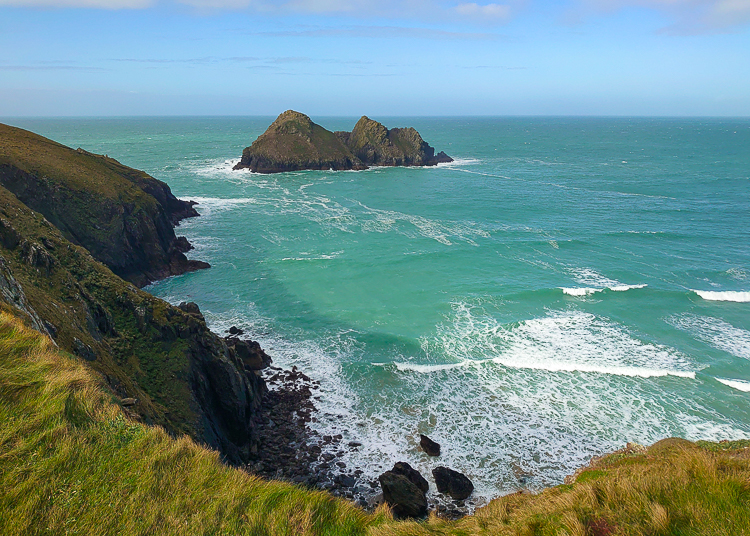 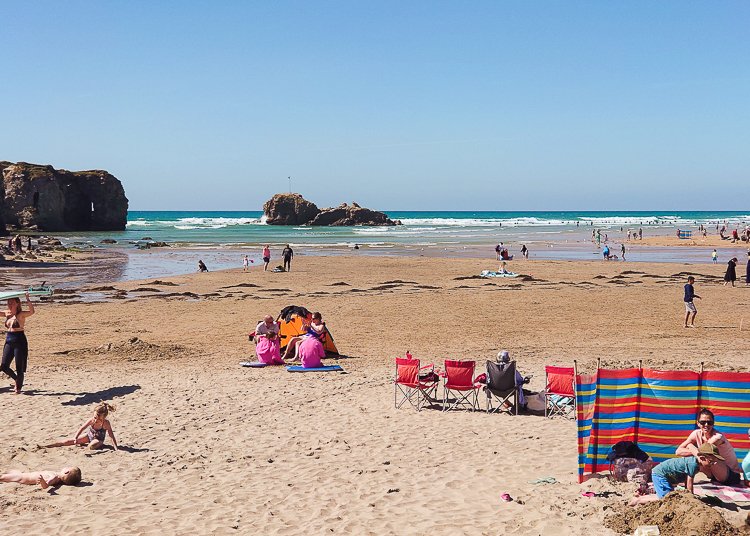 Perranporth beach is a popular holiday spot – and great for a swim after a long day’s hike!

YHA And Other Places To Stay 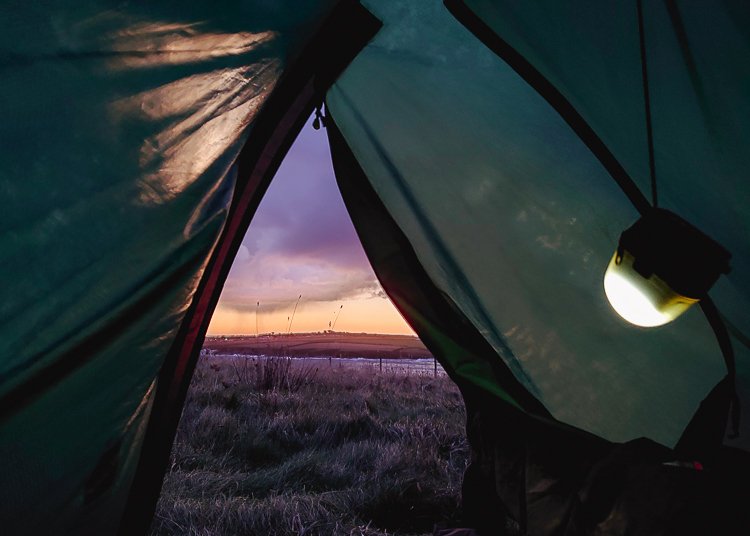 Read Articles About Hikes And Walks Between Hartland Point And Perranporth

This section includes larger towns like Perranporth, St Ives and Penzance, as well as smaller towns like Porthleven. There are other beautiful places too, like St Agnes, Godrevy, Porthcurno,  Mousehole, Church Cove and Mullion Cove. And don’t forget Land’s End…as long as you don’t look at the monstrosity behind you!

There are miles of sand on Perranporth and Perran beaches at low tide. This view is from the cliffs at Droskyn Point (where there’s a YHA) 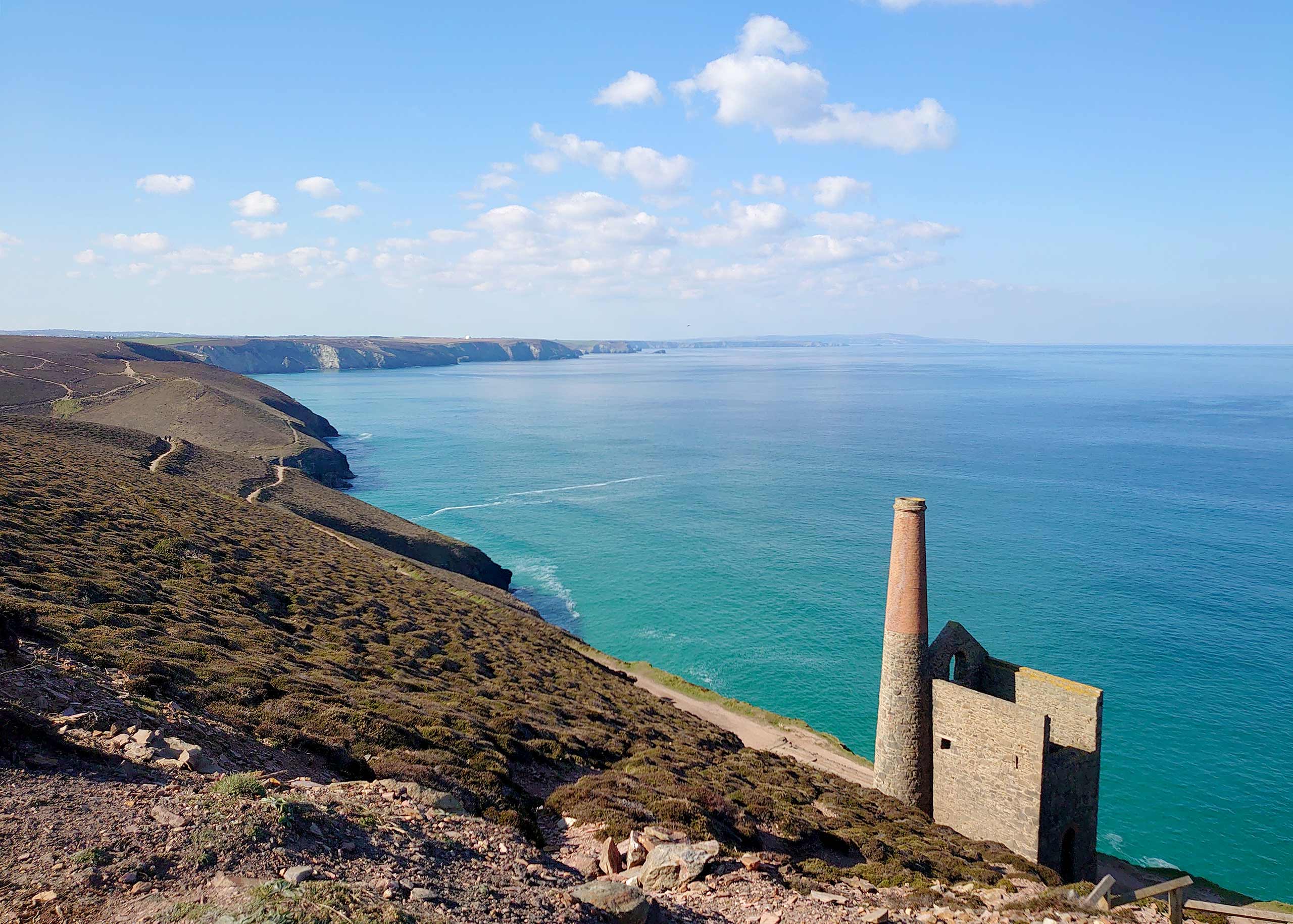 Footpath to Godrevy on the Porthtowan and Portreath to Hayle section

Watching the sunrise from a wild camp at Porthcurno 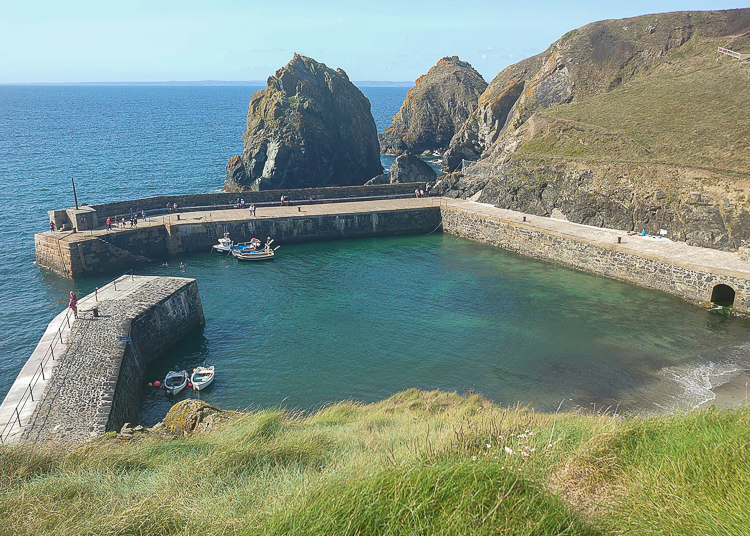 None needed for this section 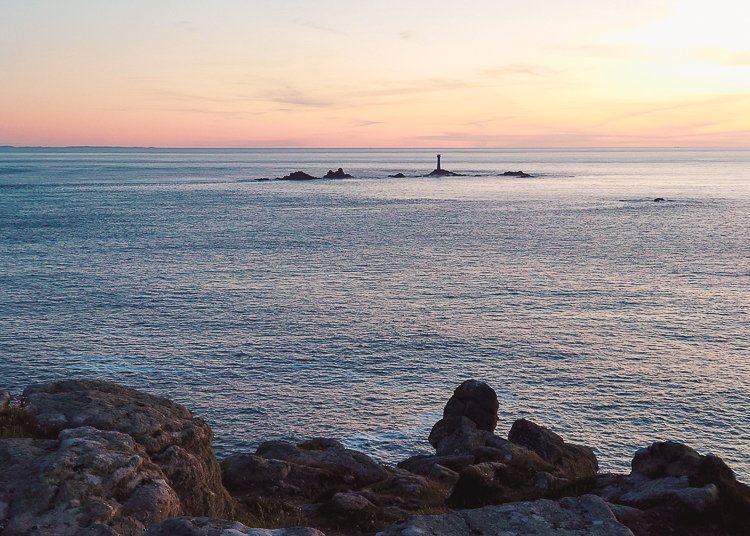 Read Articles About Hikes And Walks Between Perranporth And Mullion Cove

Plan Like A Pro – Plan all your hikes with this guide – everything from working out how long it’ll take, to budgeting and celebrating!

How To Plan A Backpacking Trip On A National Trail: Travel – how to get the best price tickets, etc

Celebrate the halfway point of the South West Coast Path at Porthallow!

Highlights of this section include Kynance Cove, Lizard Point (the UKs most southerly point), Helford Passage, Falmouth, Portscatho, Fowey and Polperro – and plenty more besides! 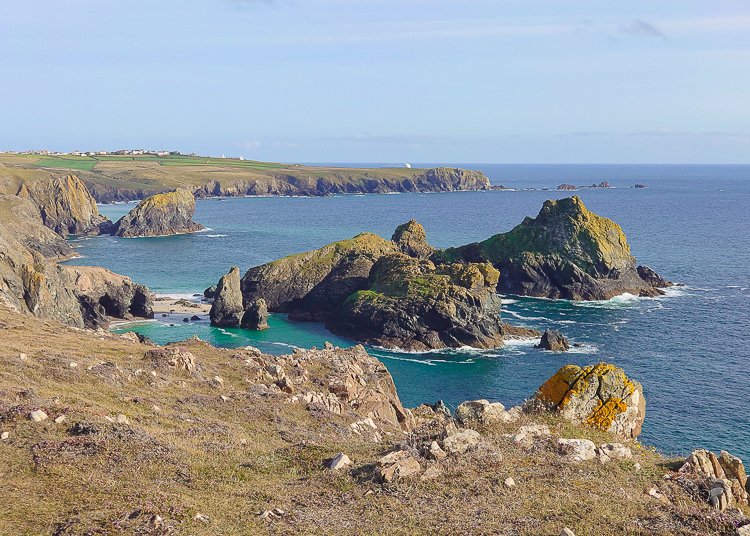 Heading down to Kynance Cove on the Lizard Peninsular

Durgan Beach on the Helford River near Falmouth 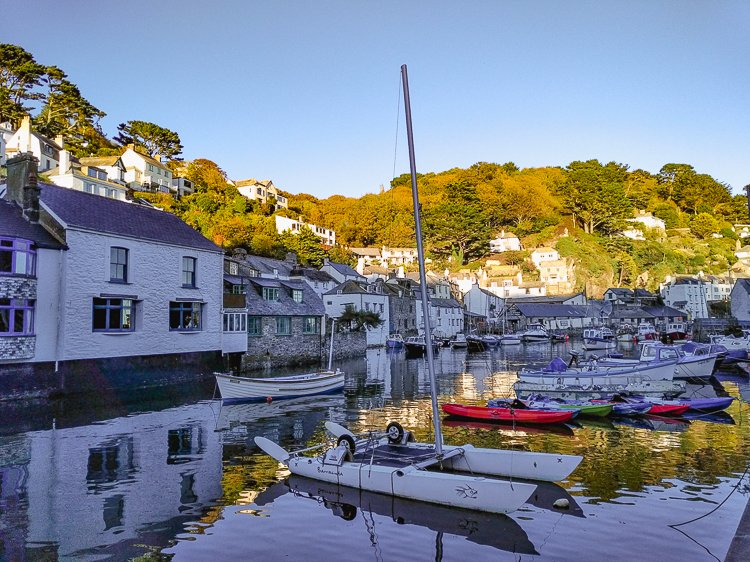 It’s worth a wander around the old streets of Polperro

I recommend section hikers do this one in summer.

*The Falmouth to St Mawes Ferry runs all year, but you need the St Mawes and Place ferry to get from Falmouth to the start of the trail on the Roseland Peninsular.

Read Articles About Hikes And Walks Between Mullion Cove And Looe

Includes part of the Jurassic Coast from Dawlish to Torquay (Devon) 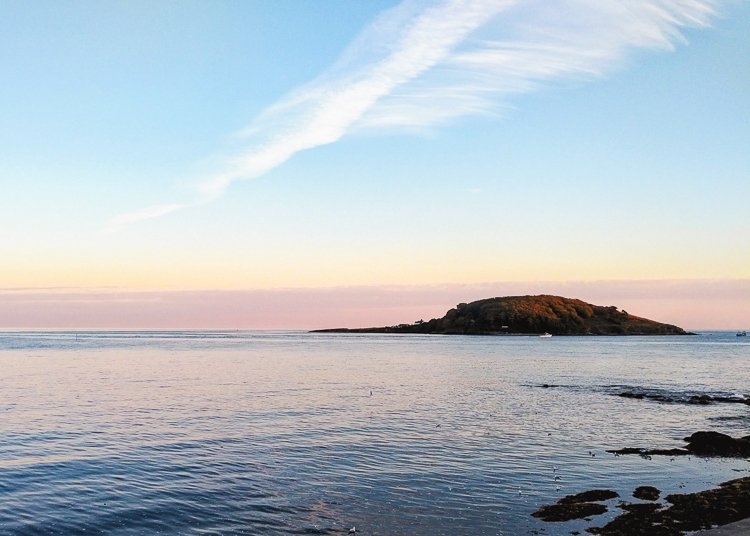 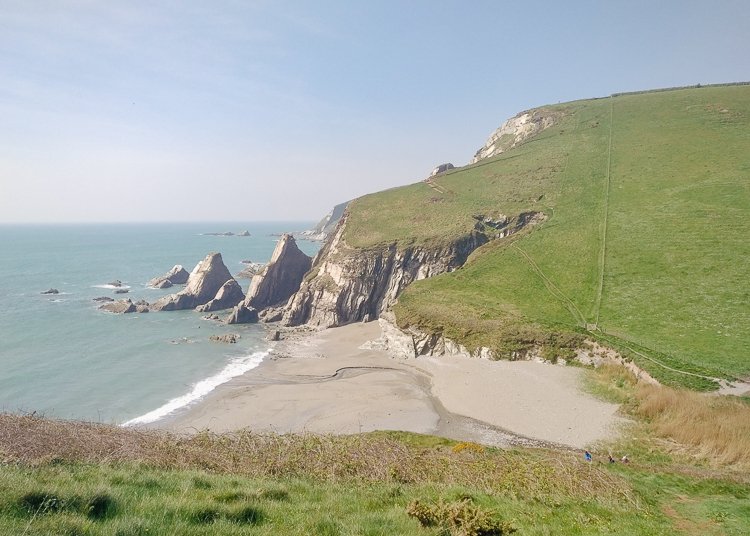 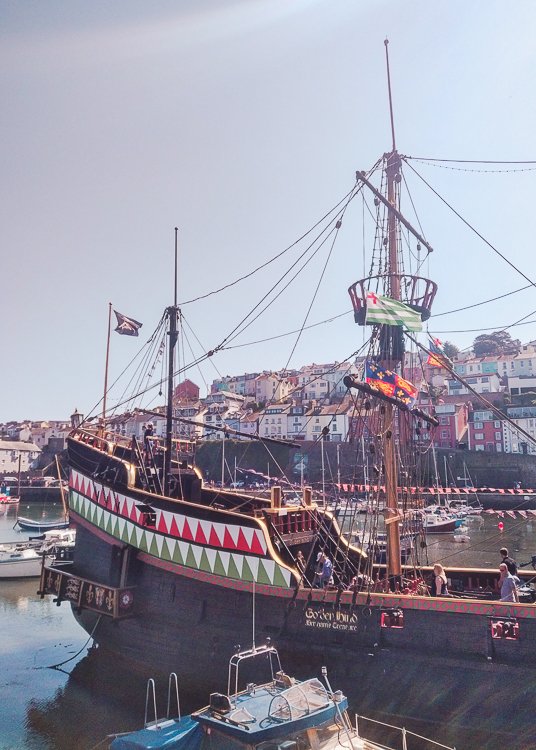 Brixham harbour is bustling and full of colour

There are loads of large rivers and estuaries in this section so if you’re section hiking it’s definitely one for summer.

There are no YHAs on the coast path in this section.

Read Articles About Hikes And Walks Between Looe And Torquay

The Jurassic Coast begins in this 100-mile section at Exmouth and the geology is just breathtaking. You hike through The Undercliff, Lyme Regis, Chesil Beach and the Isle of Portland to name but a few. 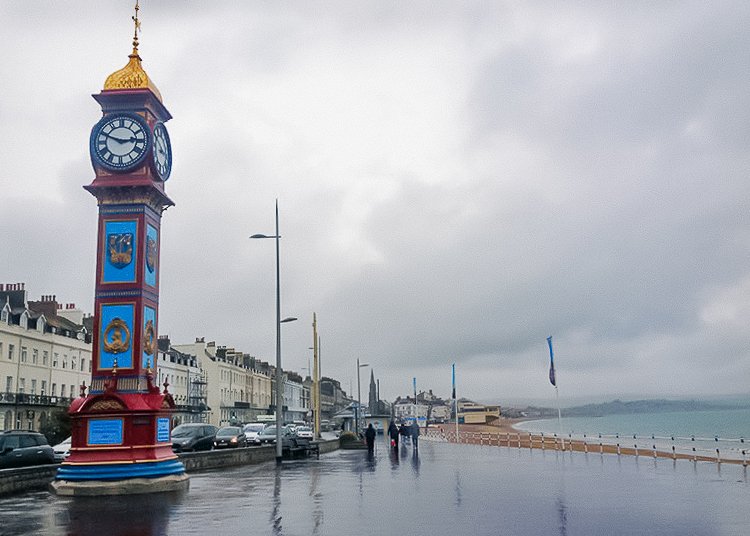 Weymouth is a large Dorset town which is the perfect place to resupply – and duck out of heavy rain! 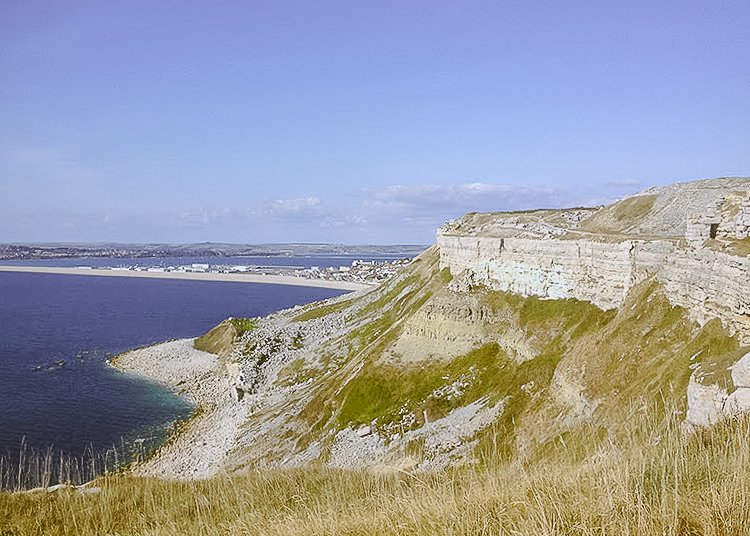 Chesil Beach from the Isle of Portland 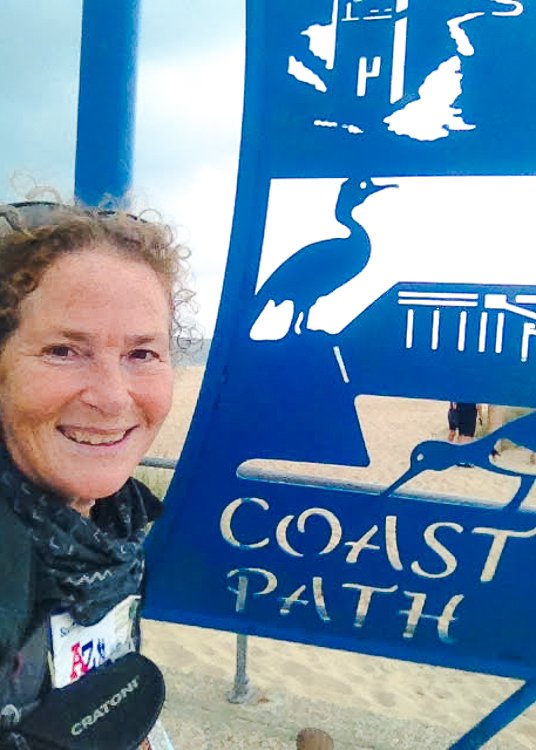 Finished! The famous blue sign that marks the end of the South West Coast Path at South Haven Point

*It’s also possible to get a train round the river Exe from Starcross (near Dawlish) to Exmouth, via Exeter (GWR branch lines) – especially useful if you’re hiking out of ferry season

This section includes the final stretch of the Jurassic Coast to Old Harry Rocks, then on through Studland to the end of the South West Coast Path at South Haven Point (Poole Harbour).

It’s a breathtaking hike that includes iconic scenery including Durdle Door, Lulworth Cove and Old Harry Rocks – you won’t be disappointed even though it marks the end of the trail! 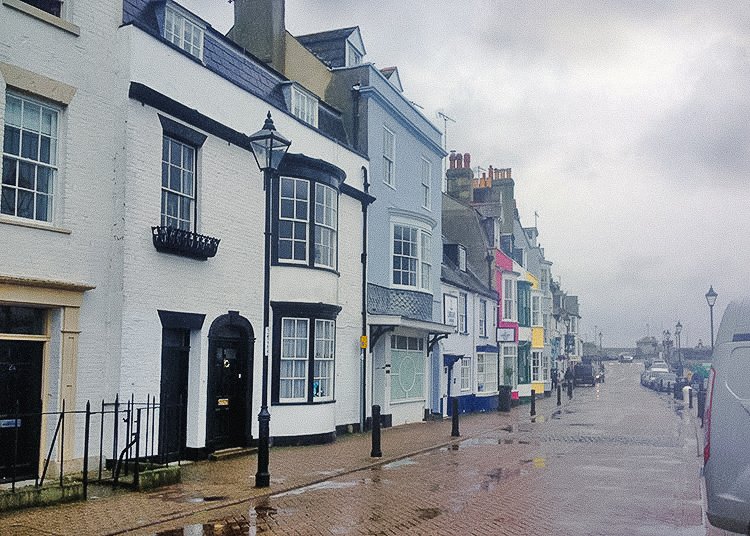 There are no YHAs on the coast path in this section.

Read Articles About Hikes And Walks Between Weymouth And Poole Harbour

Thanks for reading Walking The Ridgeway: The Ultimate Guide To Hiking Britain’s Oldest Road! I hope you enjoyed it and found plenty of useful info for planning your own adventure but feel free to leave a comment if you’ve got a question. I’d love to help if I can.

Why not support me to write more guides? I plan to hike all of our national trails and share everything I learn with you in guides just like this. My supporters over on my Ko-fi page helped me raise funds for part of the train ticket for hiking this trail, and now I’m fundraising for the next one! You can support me for just £3 – the price of a cup of coffee (I love a cappuccino!). (Ko-fi is where I share regular mini-updates as well, head over and follow me there too, it’ll be lovely to keep in touch.)

Thank you so much, I really appreciate it. 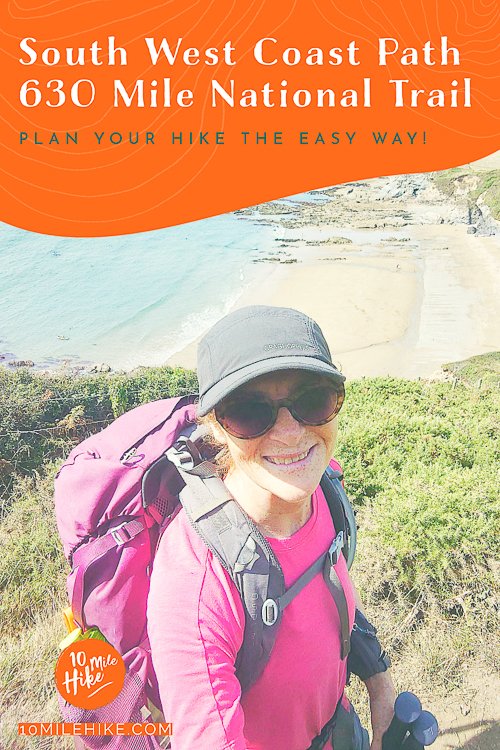 Pin me and save me for later!